(Update: Nokia disagrees with our report. However, we have two additional sources which agree with it).

According to a trusted source, Nokia is now likely to use Windows Phone 7 as an additional platform for its phones. Also, Nokia’s board has given new ex-Microsoft CEO Stephen Elop the green light to change the company’s strategy if needed, a source familiar with these matters said. This new mandate includes decisions on OS strategy or alliances.

Prior rumours of either Nokia dropping Symbian or adopting the competing Android platform have been unfounded. It’s only now that such strategic options are becoming viable to a Nokia CEO.

Nokia embracing Windows Phone 7 would be a key win for Microsoft and would make it the third major platform behind Apple’s iOS and Google’s Android at a time when there’s a major OS landgrab going on. In recent months Microsoft has faced serious setbacks attracting device makers to the new platform, with only HTC, Samsung and LG unofficially confirmed as launch partners (update: Asus and Dell, too). Long-time ally HP has shifted its strategy to its own platform, and Sony-Ericsson has gone all Android for 2011 .

Nokia is counting on Elop’s software expertise and willingness to shake up businesses as it tries to revive its fortunes in the mobile-phone market. Since the launch of Apple’s iPhone in June 2007, Nokia’s share price has fallen by almost two-thirds, decreasing the company value by around $65 billion. At last week’s Nokia World, Elop reiterated that, like his former Microsoft boss Steve Ballmer, his credo of choice is “developers, developers, developers” and he intends to instill this credo into Nokia.

Elop’s hiring is part of a new US focus for Nokia. Four months ago Nokia’s Board had hired a new Silicon Valley-based CTO in Rich Green, a former software boss at Sun. At last week’s Nokia trade show in London there were various rumours of a possible Nokia and Microsoft merger. According to our sources, Green is currently leading a due diligence effort to evaluate Nokia’s various software assets, but no actual merger talks have happened. The results of this diligence and the conclusions made by Elop will be key to Nokia’s future.

In the first interview in his new Nokia role, Elop told the Financial Times that innovation in the mobile industry had shifted to the US, where the group has struggled to compete. “That’s a shift from years before when the development of the mobile industry tended to start in Asia and move through Europe and then to North America. Now there’s fresh innovation in North America and it’s critically important for Nokia to be participating in that market.”

Nokia just announced a family of new-generation Symbian phones last week, including its new flagship device, the N8. Pre-orders for the N8 are the strongest the company has ever seen. Niklas Savander, EVP for marketing, predicted at the event that the company will ship more than 50 million new Symbian^3 phones.

Sources are  also telling us that at the CTIA trade show in two weeks Nokia and AT&T will announce that the US carrier will sell the N8 in the US.  This would be a major win for Nokia’s Symbian operating system and for Nokia, the world’s biggest mobile gadget maker, which, for various reasons, has failed to gain traction in the US in recent years. Nokia, amongst other hanset makers, has had a hard time attracting developers to build apps for its phones because Symbian has been a bit of a bear to use.

Amongst the key question Elop will have to evaluate is the role of Symbian going forward. Since 2008, key to Nokia’s strategy was to transform Symbian into a modern-day OS and make cross-platform development software Qt the main tool for its developers.

Three months ago Nokia launched its Nokia Qt software development kit (SDK) for Symbian. With the Qt mobile SDK, Nokia promises that developers will use 70% less code and develop apps in 50% of the time it would take them on native Symbian C++. According to Thiago Macieira, Nokia Senior Product Manager for Qt, there are 250,000 developers already using Qt. Now the company’s challenge is to convince developers to give the Nokia SDK a chance.

With that 50%, Symbian’s attractiveness to developers goes from dead-last to middle of the pack. 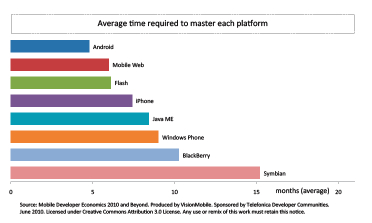 At the Nokia Developer Summit 2010 last week I discussed Qt with various developers. Particularly there was a session led by Michael Samarin from development company Futurice who described the challenges with current Qt cross-platform development. Samarin’s response to Qt was overwhelmingly positive, as was the response of the developers in the room, and the challenges he described, overall, were trivial. Developer sentiment was that Nokia’s equivalent to Apple’s App Store, the Ovi app store, seems to be much improved and that operator billing is proving to have great effect on app monetization. 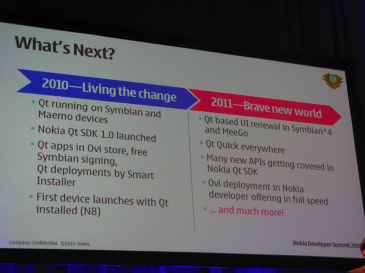 Developers will quickly find an installed base for Symbian apps developed with Qt. The new Symbian^3 phones, including Nokia’s new flagship N8 phone, will support Qt, and so will 20 of the current top-selling Symbian devices. While even Symbian fanboys are not ready to compare the N8 to the iPhone or the cutting edge Android phones, both the N8 and the E7 are solid devices. Still, much better Symbian phone reviews will likely not happen until a much needed Qt UI renewal in Symbian^4 phones takes place at some point in 2011. (In the Visionmobile study, around 50 out of 100 Symbian, BlackBerry and Windows Phone perplatform respondents were annoyed with the difficulty in creating great UIs.)

The question is, what will Nokia’s new CEO, Stephen Elop, do to accelerate Nokia’s turnaround. With Symbian embattered but improving, Nokia still rumoured to be launching a family of MeeGo devices in Q4 2010 and now Windows Phone 7 getting into the picture, all bets are on the table.