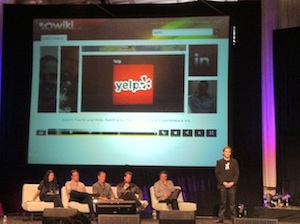 Startup Qwiki unveiled a new service today that it calls the future of information consumption.

Co-founder Doug Imbruce, who demonstrated Qwiki on-stage at the TechCrunch Disrupt conference in San Francisco, compared the site to what you see in science fiction movies like Wall-E, where users ask a computer a question and then receive an answer with relevant images and narration.

Qwiki makes that vision a reality, Imbruce said. You type in a search term, then Qwiki pulls information and media from the Web (from Wikipedia, yes, but from other sites too), then narrates the answer in a computerized voice while displaying related media. Imbruce even took search requests from the audience, looking up “Chris Sacca” (an angel investor who was one of the startup competition judges) and “chipmunk”, then returning a reasonably informative “qwiki” in both cases. (Due to a typo, the Qwiki demonstrator brought up the definition of “Alvin and the Chipmunks” instead of “chipmunk”.)

The startup judges seemed impressed with the idea, but uncertain about how someone would use it. Andreessen Horowitz’s Gina Bianchin said she liked the example of using Qwiki on your phone in the morning to get a summary of the morning news, the weather, and your schedule. Another said this might be useful for teaching English.

Qwiki has raised $1.5 million in funding. You can request an invitation on the site.

What is Qwiki? from Qwiki on Vimeo.