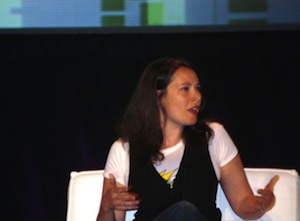 The Women in Tech panel at the TechCrunch Disrupt conference in San Francisco just wrapped up. There was plenty of argument among the women on the panel — not least from TechCrunch’s Sarah Lacy (pictured), who moderated the discussion but also said she disagreed with holding the panel in the first place.

Trying to summarize the digressive, often awkward conversation would probably result in one of the least focused posts ever. (That’s not a knock on the fact that TechCrunch was essentially shamed into holding the panel — it’s a worthy topic, but hard to tackle on a panel where almost everyone wants to talk about a different issue.)

Luckily, Lacy ended the panel by asking each speaker to leave the audience with one message, and that seems like a good way to summarize the panel’s main ideas.

Michelle Greer, Web marketing consultant with SimpleSpeak Media: “Software development and technology is a noble career for both women and for men.”

Leila Chirayath Janah, founder and CEO of Samasource: “I feel like this discussion is funny for me to be a part of, because I work in poverty mediation, and the plight of women globally is hard for us to imagine.”

Sarah Chipps, founder of Girl Develop IT: “Let’s get some stories out there about people who are doing it, [and] not because they are women.”

Cyan Bannister, founder and editor-in-chief of Zivity: “I think we should focus on being good parents. I think if we expose children, both boys and girls, at an early age … you’re going to start seeing more women in technology.”

Rachel Sklar, editor-at-large at Mediaite, who prompted the latest debate: “I tend to believe that a rising tide lifts all boats. And for the record, I love dudes.”

Sarah Lacy, TechCrunch: She hasn’t talked to AOL chief Tim Armstrong about whether she still has a job post-acquisition, but if not, “Please don’t hire me just because I’m a woman.”

See our video of the session for more.