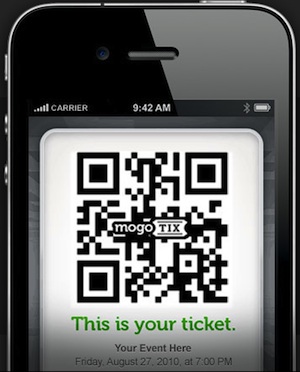 San Francisco startup Mogotix recently announced its new ticketing service. It’s hardly the first company to offer mobile ticketing, but it’s the first one I’ve seen that uses phones as both the ticket and the ticket reader.

I met up with chief executive Scott Thorpe at the TechCrunch Disrupt conference to get a demonstration of the service, which you can see in the video below. (Because I’m not that bright, I didn’t realize that recording the video in my iPhone’s vertical mode meant it would be shrunk down in YouTube — but I think you can still see the app in action.) The idea is that you receive the ticket on your phone in the form of a QR code, which can then be scanned by the event organizers using a Mogotix app.

And when your ticket is scanned, Mogotix also adds your name to a list of attendees, which can be projected onto a screen for everyone to see. That may just sound like a cool extra feature, but Thorpe said it has been embraced at the tech industry events that tested the service. And Thorpe hopes to add more services around real-time attendee data.