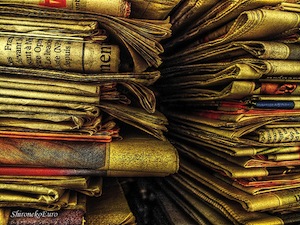 As readers seem to expect more and more live news coverage, a Toronto startup called ScribbleLive has been developing a fast, collaborative way for news organizations to keep up. Cofounder and chief executive Michael De Monte said the latest version of the service, which launched today, lays the groundwork for what he’s hoping will be a new kind of news article.

ScribbleLive is already pretty cool: News organizations create a Web page or an embedded stream of content to cover a specific event or breaking news story. Then reporters can add updates in almost any way they like. They can log onto the site and post stories, pictures, and videos, of course, but they can also email their text, photos, and videos, or upload them via an iPhone application. And they can incorporate reader comments and Twitter updates into the stream.

Today’s updates add more ways to cover the story. Reporters can leave a voicemail that will be posted on the site, or send an SMS text message. There’s a new BlackBerry app. ScribbleLive offers more security on its news sites using Secure Sockets Layer technology.

This may sound like liveblogging software such as CoverItLive, but I was impressed by the wider range of features ScribbleLive offers. Plus, De Monte said liveblogging competitors only offer content in the form of a widget, while ScribbleLive lets publishers create their own branded pages. And now it’s possible to push updates to multiple pages at once — for example, a national news organization could push presidential election news to different local news pages.

ScribbleLive launched the earliest version of its service back in 2008, and it’s used by large organizations like Reuters and Hearst Television. For now, it’s mainly a supplement to traditional news articles, De Monte acknowledged — if you want to follow a news story as it happens, then it makes sense to check a ScribbleLive page for updates, but if it’s days or weeks later, then a more digestible news article is probably more attractive.

But the company’s long-term goal is to erase that boundary. In other words, De Monte wants a ScribbleLive page to become that definitive news article, not just a liveblog that’s only relevant for a few hours. We’ll begin to see that shift later that year, he said, when the company adds the ability to edit the page, dragging and dropping content wherever you please (right now everything’s presented as a stream of content in reverse chronological order, though you can “pin” specific posts to the top). So the page starts out as more of a liveblog, then news organiztaions can edit it as the story develops, polishing and consolidating the content.

ScribbleLive raised a seed round from Rogers Ventures at the end of 2009, and just raised another round from the same firm. It plans to raise a venture round in the next four to six months. 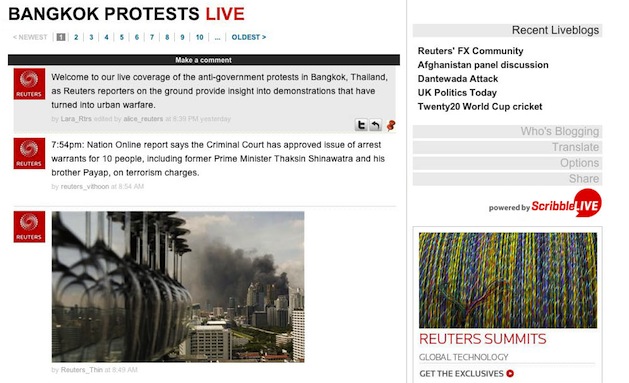