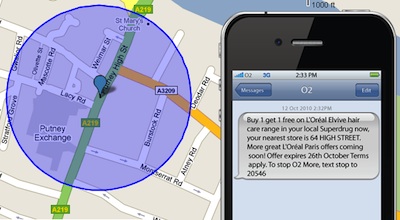 Location-based advertising doesn’t seem to have reached a mass audience yet, but things may be changing. San Francisco startup Placecast just announced a deal that should bring its location-based ads to 1 million new users.

Placecast is partnering with O2 (owned by Telefonica) to deliver ads on the mobile carrier’s O2 More service in the United Kingdom. Previously, O2 More delivered offers based on customers’ age, gender, and interests to more than 1 million subscribers. Now it’s adding location.

The two initial advertisers in this partnership are Starbucks and L’Oreal, which have both activated “geo-fences” around their UK stores. So when an O2 More user gets close to the store, and if they’ve expressed an interest in what the stores are selling, they’ll receive a special offer on their phone via SMS or MMS.

And again, it’s an “opt-in” program, so the only people seeing these ads are folks who said they wanted to receive promotions from O2. The alerts are also capped at 1 per day, and customers are never supposed to receive the same message twice.