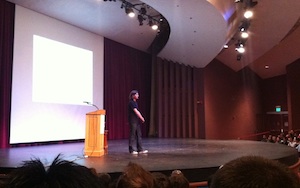 Dalton Caldwell, co-founder and former chief executive of failed social music startup Imeem says you might want to scrap that idea for a music startup of your own.

Caldwell spoke at incubator Y Combinator’s Startup School today about lessons learned in Imeem’s failure. He walked through a number of different music business models, including tools for independent musicians, download stores, subscriptions, and advertising (Imeem’s model) and identified the big problems he saw with each model.

There seemed to be some common threads. For one thing, each licensing deal with the music labels tends to include a minimum quarterly payment that startups have to pay, even if their revenue doesn’t meet expectations. Also, in most models, Caldwell pointed out that the costs are high enough and the margins are low enough that you’d have to sell an unrealistically high amount of music to break even. Plus, most of these offering types are already saturated with competition. Finally, even if you want to sell your startup to another company, there’s a big problem: In every licensing deal Caldwell said he has seen, the record label has the right to renegotiate or pull out of the deal if you get acquired.

So is it completely hopeless? Caldwell did note that the most promising model seemed to be a radio station for licensed music — namely, the Pandora model. Even then, there may not be much opportunity for a small startup at this point, he said.

Caldwell argued that in order for music startups to succeed, some big changes need to happen. Someone needs to release a set of broadly available application programming interfaces (APIs) for music that other websites and services can use. That’s what Imeem tried to create, but it failed. And Congress needs to create a broad set of licensing frameworks, so that there’s an affordable way for startups to license music without negotiating deals themselves, he added. Oh, and those frameworks need to work internationally.

All of this might seem like sour grapes given the failure of his startup, Caldwell acknowledged. (Imeem was acquired and shut down by MySpace last year, an experience that he said “sucked”.) But he said record industry executives aren’t trying to be jerks. Instead, they’re in a tough situation because their revenue is shrinking rapidly, and some dinky startup licensing deal isn’t going to change that.

“These are real people with families, and their entire industry is [getting] burnt down,” Caldwell said.

So does he regret creating Imeem? “Sometimes,” he said — after all, he spent six years on a product that got shut down. At the same time, Imeem built his reputation in the tech world, which helped him found and raise funding for his new startup, PicPlz. So I guess we don’t have to feel too bad for him.