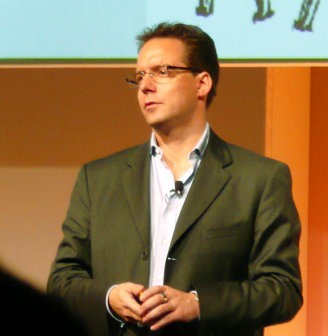 The foundation is a non-profit organization, founded in June 2008, that spearheads the development of the Symbian mobile operating system. Williams served as chief for two years and will be replaced by Symbian chief financial officer Tim Holbrow. Interestingly, Williams isn’t taking his time with the move — he’s gone, effective today.

The move may be a sign that the Symbian Foundation will be calling it quits sometime soon, “super secret” sources tell The Really Mobile Project. That wouldn’t mean the end of Symbian necessarily — only that decisions regarding the platform won’t have to go through the foundation’s bureaucracy. Earlier this year, the foundation open sourced the code behind the Symbian^3 platform, so work on the platform could continue even if the foundation implodes.

More likely, Williams’ departure could be a response to the terrible reviews Nokia’s flagship N8 phone is getting, which is the first phone to run the Symbian^3 platform. Engadget rated the N8 5 out of 10 in its lengthy review, and PC Magazine’s Sascha Segan rated it 2.5 out of 5. Segan writes: “If the rating on a review was just about features, the Nokia N8 would get much higher than a 2.5. But I wanted to throw this phone through a window, it was so frustrating to use.”

My N8 review, in which I wholeheartedly agree with Segan’s analysis, is forthcoming.

Via Engadget, photo via Natasha Lomas