Meanwhile, 63 percent of top Nokia developers say that publishing on the Ovi store is still a good business decision. A high proportion of Nokia developers post apps on multiple stores with 60 percent active on the Android market and 66 percent on the Apple app store.

We previously published survey data from Open First which queried developers from all the major app stores. This one concentrates on the Ovi store, Nokia’s application store on its most recent Symbian phones like the N8, in particular. The number of applications on the Ovi store is still a fraction of those on Android or Apple stores but it’s increasing (See chart from Distimo below). 104 developers, selected from the top paid and free Nokia app publishers, responded to the survey. 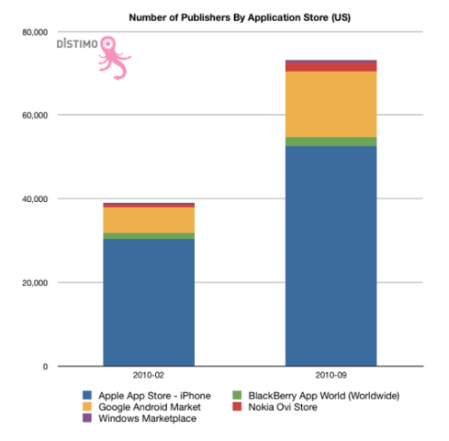 Only 50 percent of Nokia developers are satisfied with the store. 69 percent said revenues are lower than expected and most developers blame the store for this, saying in particular that it’s hard to find apps and that Nokia does not provide enough promotion tools. The percentage of respondents who said their revenues are higher than expected decreased from 5 percent to 1 percent. In spite of this 70 percent say that they intend to continue to publish on the Ovi store.

Apart from search and promotion tools, the main complaint from developers is that the quality approval process is slow and inconsistent. Note that Apple developers were also not always happy with Apple’s approval process, according to the results of the previous survey.

Nokia doesn’t seem to be doing a great job of communicating with developers. Although they complained about user support issues related to the Ovi store itself, 58 percent of respondents didn’t realise that Nokia offers end-user support for Ovi issues. On the plus side, those happy with Nokia’s support for developers rose from 37 percent to 48 percent. 26 percent of respondents weren’t aware of the changes announced at Nokia World last month, which include in-app purchase and advertising, new developers tools, etc.