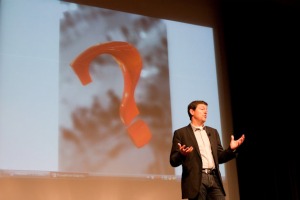 Well-known venture capital investor in Twitter and Foursquare, Union Square Ventures, is raising a third fund likely to be somewhere in the neighborhood of $500 million, peHUB reports. That’s more than twice the size of its $156 million second fund that closed in 2008.

In the peHUB article, Union Square investor Fred Wilson (pictured) said the amount wasn’t that high, although he didn’t dispute that a third fund is in the pipeline.

“The rumors of USV raising a large fund are categorically false,” he wrote in an email to peHUB on Saturday. “We will never raise a large fund. We like the small fund model and are completely and totally committed to it.”

Requests for additional comment from USV were not immediately returned Tuesday. The VC’s debut fund was only $125 million, which it launched in 2004.

Wilson, who once famously called Apple “evil” for its seemingly relentless quest to dominate the mobile ecosystem and who dismissed Facebook as simply a “photo-sharing site,” may not be hedging his bets in declining to disclose an exact amount of any third fund.

An early investor in everything from white-hot gaming company Zynga to blogging platform Tumblr, Union Square has long been at the forefront of handing out early-round funding to startups it thinks can go the distance.

Thus far its track record has been lucrative and solid: USV’s exits include Feedburner, which Google snapped up in 2007 for a reported $100 million; Yahoo’s $30 million acquisition of Del.icio.us in 2005; and Tacoda, which AOL bought for terms rumored to be in the $300 million range and promptly shuttered.

But the days of small seed investments turning into massive payouts may be waning, third fund or no, said USV last week. Wilson warned in a blog post Friday that “storm clouds are coming” as the frenzy to invest in the latest tech darlings has gotten out of hand.

“I think the competition for ‘hot’ deals is making people crazy, and I am seeing many more unnatural acts from investors happening,” Wilson blogged.

Coming on the heels of Tumblr’s “large and competitive” (but undisclosed) round of funding last week, USV may keep its third fund small not only to follow a company model, but because it is finding the latest spate of buy-ups to be irrational and bad for the industry overall.

“If it were just valuations rising quickly, I’d be a bit less concerned,” said Wilson. “But we are also seeing large deals ($5mm to $15mm) getting done in a few days with little or no due diligence. Investors are showing up at the first meeting with term sheets. I have never seen phases like this end nicely.”