Milo.com, a startup that lets shoppers see online which products are available on the shelves of local stores, is giving users even more reason to go shopping– it’s adding coupons to its service.

Shopping deals seem to be a big focus among location-based services. Facebook, for example, just announced that retailers can offer deals through its Places service. But Milo founder and chief executive Jack Abraham argued that the payoff from those deals isn’t obvious, since shoppers will often only see the deals after they’ve already checked into a location. In other words, those coupons may not bring in new customers, he said.

People browse Milo, on the other hand, at the most valuable time to retailers — when they’re thinking about buying something but haven’t decided where to buy it from. So if you’re searching for a specific toy, stores can lure you in with a coupon for that toy. Abraham added that retailers are catching on to the fact that the Internet has replaced the newspaper coupon page of the past.

Palo Alto, Calif.-based Milo says it already offers coupons from 28,000 of the 52,000 stores on the site, including Advance Auto Parts, Guitar Center, and Famous Footwear. Some of those coupons come directly from the stores, while others come from coupon aggregator Spotzot. They can be printed out, but they’re also “mobile ready”, meaning you can also just bring up the coupon on your phone — assuming the store has the proper scanning equipment.

For Milo, this is more than just a nice addition. It’s also one of the first ways the startup can demonstrate its value to stores. It’s hard to measure how many shoppers were directed to a store by a Milo search, but when the store validates coupons, it can tell which shoppers come from the site. Abraham said there will probably be other ways for Milo to track its value to stores in the future. Making the case for that value is a key part of the company’s business plan.

Milo raised a $4 million round of funding from True Ventures and various angels, including Felicis Ventures’ Aydin Senkut (who also invested in VentureBeat). 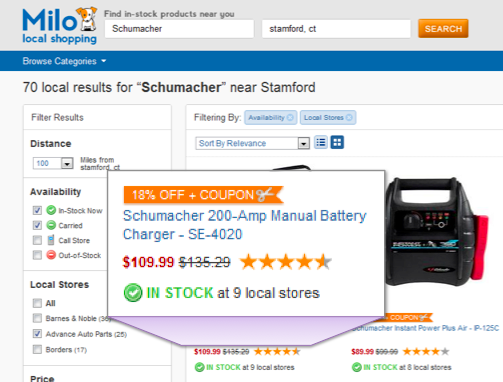