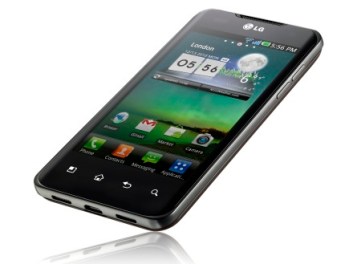 If you had asked me earlier this year which company would introduce a dual-core phone first, I certainly wouldn’t have guessed LG. But now that is indeed what we’re getting: The Korean company today launched the Android-powered Optimus 2X, the first phone ever to sport a dual-core processor.

The phone is a follow-up to LG’s successful low-end Optimus One phones. The 2X features Nvidia’s dual-core Tegra 2 processor running at 1 gigahertz, which promises to bring more horsepower to your phone than any single-core processor can provide. In a recent benchmark by Engadget, the 2X unsurprisingly blew past the Nexus One and Droid X in performance.

It packs a 4-inch display, 8 megapixel rear camera and a 1.3 megapixel front-facing camera for video conferencing. The phone will ship with Android 2.2, but LG says that it will be upgradeable to the newer 2.3 release. Notably, it can record 1080p high-definition video (most phones today are limited to 720p HD recording).

I’m personally not too keen on 1080p video recording on cellphones (even though it’s coming from other manufacturers like Sony Ericsson). Cellphone camera sensors and lenses aren’t sophisticated enough to take advantage of the added resolution in 1080p files, plus storage space is still something that needs to be conserved. The Optimus 2X, for example, packs 8 gigabytes of on-board storage, and you can also add extra storage up to 32 gigabytes.

That’s not a lot of space for 1080p video, a few minutes of which could take up a significant chunk of space. Considering that the difference between professionally made 720p and 1080p HD video is still tough to discern on TV screens under 50 inches, putting 1080p recording on phones just seems like overkill.

The Optimus 2X also packs in a 1,500mAh battery, which is on-par with other high-powered Android smartphones. It’s unclear how that battery will fair with the 2X’s more power-hungry dual-core processor.

LG says the Optimus 2X will land in Korea next month, and it will hit countries in Europe and Asia afterward — markets where the company is likely more comfortable launching major products. There’s no word yet on when it will be available in the US.