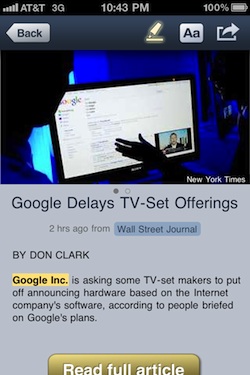 It seems like a good time for news on mobile devices, with the popular Flipboard iPad application launching earlier this year, and News Corps’ iPad-only newspaper The Daily coming in a few months.

But where most apps either represent a single publication (like CNN or The New York Times) or are built around social aggregation (like Flipboard), a Moscow, Russia-based startup called News360 says that the key to nailing the news experience on the phone is using artificial intelligence and semantic analysis to deliver a smarter, better-organized experience.

News360 just launched an upgraded version of its iPhone app and also announced that it has raised an undisclosed amount of seed funding from the Russian firm Oradell Equities.

There are a few different components to News360’s technology. First, there’s the crawler, which currently collects news from more than 500 sources (that number is supposed to increase to 1,000). Then there’s the entity extractor, which identifies the companies, people, brands, and places in each story. An object dossier creates informational pages around those topics — for example, if I mention Apple on News360, you can click on the word “Apple” and the app will give you a short rundown of what Apple is. Articles from different sources that are about the same news get clustered together, and they’re also divided into different news categories.

So there’s supposedly a lot of complicated technical stuff on the back end, but on the front end users should see the most important stories of the day, organized into an easy-to-browse format. You can also search for news, focus on stories that are relevant to your current location, or browse categories like tech and business.

Now, none of that sounds like a huge leap forward from news search engines like Google News. Even if some of the backend technology is better than what already exists, I suspect the difference isn’t big enough to win people over. But that’s why the focus on mobile is smart. News search or RSS-reading can be a pain on the phone. News360 ties its technology to a simple swiping interface that makes it easy to scroll through a bunch of news at once. And the object dossier means that you can get quick answers a lot of the basic questions that can come up during newsreading (“Wait, who is that again?”) without having to perform a bunch of Web searches.

I played with the News360 app last night, and as implied above, I liked the interface. I thought the object dossier was super-useful, even though it wasn’t totally accurate — in an article about an America tourist murdered in Jerusalem, I clicked on the “Jerusalem” link and was told, “Jerusalem is a DOS file virus detected in Jerusalem, Israel.” The main downside was the fact that the app only includes the first couple paragraphs of each article, so you have to jump to the publisher’s website to read the whole thing. But hey, that’s good for publishers, it should help avoid thorny legal issues, and even on those websites you can still click on links to the News360 dossiers.

With Version 2.0, News360 now supports landscape mode, it integrates with Instapaper and Read It Later so you can read articles when you’re offline, and it includes stock price charts in company dossiers. An Android app is planned soon.

News360 hasn’t shared any numbers about total downloads, but it was included as one of the best news apps in Apple’s Year in Review section in the App Store.