With this year’s Consumer Electronics Show behind us, it’s time to take a look back and reflect on what stood out the most. There were plenty of tablets, phones, computers and other gadgets at the show, but only a few were truly memorable. This year we saw a phone that turned into a smartbook, RIM’s miraculous comeback, a PC competitor to the Macbook Air and more.

We expected to be wowed by tablets more than phones at CES, but leave it up to Motorola, creator of the Droid phone that helped popularize Android, to deliver a phone unlike any other. The Atrix is a powerful 4G smartphone for AT&T powered by a 1 gigahertz dual-core processor — but that’s not what makes it interesting.

The device is so powerful that Motorola created two docks to let consumers use it to its full potential: One, dubbed the Laptop Dock, effectively lets you use the phone as a smartbook — complete with a touchpad and keyboard. Another dock lets you use the Atrix to power a computer monitor and plug in your own keyboard and mouse.

It’s the first smartphone to truly cross the line between computer and mobile device, and it was by far the most fascinating gadget at CES.

On top of the Atrix, Motorola also managed to deliver the best looking Android tablet with the Xoom — a feat considering that there were dozens of tablet competitors at the show. The 10.1-inch Xoom was the most iPad-like Android tablet with its polished hardware, and since it runs Google’s tablet-friendly Android 3.0 OS, it can also match the iPad when it comes to user experience. It’s a definite upgrade from Samsung’s Galaxy Tab, the only other viable Android tablet out right now. 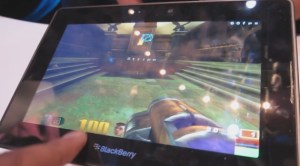 We were already impressed with Research in Motion’s BlackBerry PlayBook going into CES, but we fell even more in love with the tablet once we got our hands on it. At 7 inches, it’s more portable than the iPad and other 10-inch tablets, and I found it to be surprisingly fast. Clearly, RIM’s reliance on QNX’s software for the PlayBook’s OS is a good thing, as the tablet is light years beyond anything we’ve seen from the company. Not only is the PlayBook a great-looking tablet, but it also gives us hope that RIM’s phones will finally get modernized with the new QNX OS.

Microsoft’s touchscreen tabletop Surface was an interesting, but unwieldy, product. Surface 2 fixes pretty much all of the first version’s issues — it no longer requires a bulky cabinet, for one — and it basically gives LCDs the power to see. Its PixelSense technology lets LCD displays recognize fingers, hands and other objects pressed directly onto the screen. And since it’s no longer bulky, Surface 2 can be wall mounted — opening up a plethora of new uses.

Windows PCs finally have a legitimate competitor to Apple’s impossibly-thin Macbook Air. Samsung’s series 9 ultraportable laptop bests the Air in almost every way — it’s slightly thinner, slightly lighter and a lot more powerful with a second-generation Intel Core i5 processor running at 1.4 gigahertz. It’s also made out of Duralumin, a metal that’s twice as strong as aluminum. It’ll be out in February at a steep $1,599 — but from the looks of it, the high price will be worth it.

The only downside to Motorola’s Atrix is that it doesn’t run on Verizon’s LTE 4G network, which is quickly gathering steam with a plethora of new devices and ridiculously fast speeds. The carrier announced that 10 LTE devices will be hitting its network during the first half of this year. And in my testing with the Motorola Bionic, the phone managed to get download speeds of around 18 Mbps and upload speeds of around 3 Mbps — both vastly faster than any 3G network.

AT&T is also moving forward with its LTE 4G network this year, while T-Mobile and Sprint are continuing to expand their 4G networks. But so far, only Verizon’s network has shown us next-generation speeds in the real world.

With Android 3.0, it looks like Google has finally brought its mobile OS up to par with Apple’s iPhone OS. Google unveiled a preview of the OS last week, and it looked positively next-generation — with a striking new interface, updated maps and email apps, as well as a more polished look overall. We also learned that it would be powering Motorola’s Xoom and LG’s G-Slate — and you already know how much we love the Xoom. We’re just hoping Google brings many of the visual niceties in Android 3.0 over to phones soon.

Microsoft has been working on its multitouch mouse for years now, but last week we finally got a look at its Touch Mouse. The mouse sports a smooth multitouch surface that’s not marred by any ugly buttons or scroll wheels, and it includes gestures for up to three fingers. Sure, Apple released its multitouch Magic Mouse at the end of 2009, but it seems Microsoft has spent its extra development time making the Touch Mouse more ergonomically friendly — something that Apple’s mice can’t claim to be. The mouse is built specifically for Windows 7, with gestures for AeroSnap and a cool task switching interface.

Now consoles aren’t the only gaming systems with motion controls. Razer’s Hydra controller brings the joy of waving your controller around to your PC. It’s powered by Sixsense’s Truemotion technology, which uses a magnetic field to detect the movements of the controller.

As VentureBeat’s Dean Takahashi explains it: “The system has a base magnet that connects to your game PC and a couple of handheld controllers that you use to maneuver through the game. The net result is that it gives a player ‘six degrees of freedom’ for controlling a game. In that sense, it’s a lot like Sony’s Move controllers for the PlayStation 3. The price of the Hydra is expected to be under $100 but isn’t final yet.”

The controller will also be featured in a special Portal 2 bundle later this year.

In a very wise move, OnStar announced a rear-view car mirror that would connect any vehicle to its service — even if the car isn’t from its parent company, GM. It’s a simple way to give any vehicle some very useful features, including the ability to ask OnStar operators questions, a 911 button, anti-theft support and more. The mirror will sell for $299, while service will run you $18.95 a month, or $199 a year.