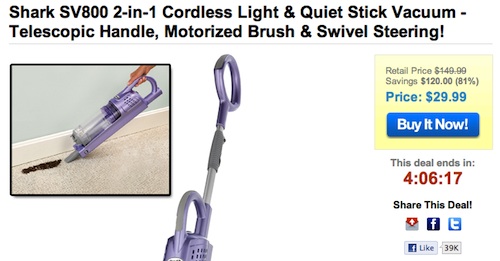 1SaleaDay, a daily deals company that seems to be flying under the tech press’s radar, just announced that it has raised what it calls a “massive capital injection.”

A company spokesperson wouldn’t give me an exact funding amount, but said it was “a high 8-figure number”, i.e., in the tens of millions of dollars.

There are obviously tons of popular daily deals services online, led by group deals site Groupon. 1SaleaDay says that across its five sites (1SaleaDay.com, Shadora.com for jewelry, Ben’s Outlet for electronics, Dynamite Time for watches, and GlassesUnlimited.com for watches) it reaches 1.5 million customers.

Here’s how founder and chief executive Ben Federman described the way his company stacks up against the competition:

As far as all the other deal-a-day sites, there are many. A few small ones, there are very few that are as large as we are. What sets us apart from all the other sites is that we follow the integrity of the day-to-day deal. We make sure that, even when we have an item that we’re able to markup a little bit, we intentionally don’t – we stick to our small margins and move more volume than anything, and make sure the customer is satisfied.

We never say, let’s take an item today, since we have 350,000 people, and mark it up $5 or $10 – we just don’t do that. Everything has to be at the best offered price. So we’re essentially pushing the wholesale cost to the customer with a very small markup, and people love it. Some days, we’re even willing to lose money to attract people.

The funding comes from Optima Ventures, an affiliate of Optima International. Optima and 1SaleaDay are now teaming up to form Octagon Commerce, a parent company that owns all five sites and will launch new social media and e-commerce products. (For more thoughts about social commerce, see my write-up of One Kings Lane CEO Doug Mack’s comments earlier today.)