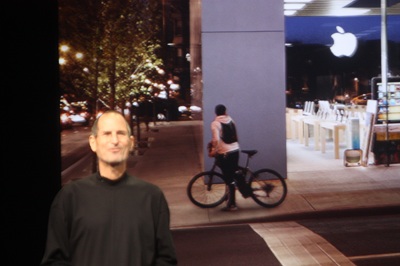 After weeks of speculation, Apple confirmed this morning it is launching the successor to its wildly successful iPad.

Apple announced that the iPad 2 will have twice the processor speed of the first iPad. With Apple’s new A5 chip, it will have nine times faster graphics than the previous A4 chip, a custom Apple design, and similarly low power consumption.

The big question was whether Steve Jobs would show up since he left on medical leave earlier this year. But he took the stage at the outset of Apple’s press event to a standing ovation — in the audience, and on Wall Street.

“Nothing is even approaching this,” Jobs said.

The new device Jobs revealed is just 8.8 millimeters thick, 33 percent thinner than the 13.4-millimeter iPad. It’s also thinner than an iPhone 4. It is only 1.3 pounds, compared to 1.5 pounds for the first one. It comes in black or white and both will ship on day one.

The new iPad 2 will be available on both AT&T and Verizon. It will have 10 hours of battery life in use and a month of standby battery life.

The device goes on sale March 11 for $499 to $829, with options for different memory sizes from 16 gigabytes to 64 gigabytes and Wi-Fi only or a 3G plus Wi-Fi option. Jobs said that iTunes has crossed 200 million accounts, with credit cards and one-click purchasing. He said Apple has sold more than 100 million books and has 2,500 book publishers now. Developers have earned more than $2 billion selling apps on the App Store.

Jobs said, “People weren’t sure if the ($499-plus) iPad price was unbelievable or not. Well, ask our competitors now.”

“Many people have said this was the most successful consumer product ever launched,” he said. “We had more than 90 percent market share and our competitors were flummoxed.”

Apple made the announcement at the Yerba Buena Gardens Center for the Arts in San Francisco, just down the street from the Game Developers Conference where Nintendo chief executive Satoru Iwata gave the keynote speech. Many believe that Apple deliberately positioned its announcement so that it could steal Iwata’s thunder. 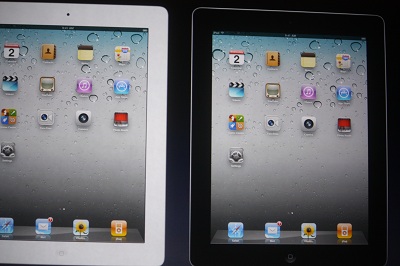 Apple’s iPad 2 comes with a number of interesting accessories such as a new stand, a cover, and an HDMI video output connector that can display images on another screen at high-definition video, or 1080p. There are two cameras and you can now do Facetime video conference calls with the iPad 2. It comes with a version of the Photo Booth photo editing software which lets you distort your photos and share them with your friends, which already comes on Apple’s desktop and laptop computers.

Apple will also release a new version of its iOS operating system, version 4.3, with the new iPad 2.