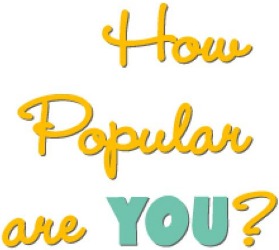 Ever wonder how popular you are on the Web — and how you stack up to others?

People search company PeekYou has developed a program that lets you track how your online persona ranks relative to others’ on the Internet.

The company’s PeekScores service, launched this summer, now indexes people with their public web URLs, then takes into account a user’s known presence and activity on the Internet.

This includes, but is not limited to, someone’s blogging, their participation in social networks, the number of friends, followers, or readers, the amount of web content someone creates, and their prominence in the news.

The program uses algorithms for analyzing and filtering public Web content, and matching it to the person who created that information or is mentioned in it.

This involves methods for cross-checking key data points identified from different sources, such as recognizing which John Smiths on the Internet are one and the same and which of them are different people.

The space is particularly crowded now due to how much more often businesses and people are using these sorts of sites to make major decisions, said the company’s founder.

“Not having a copious and well-defined presence on the Internet will soon be a serious detriment to anyone on the job market, if it is not so already,” CEO Michael Hussey told me. “Employers are placing increasing weight on a candidate’s reputation on the Internet, and one’s online persona will be weighed alongside one’s resume for any given hiring decision.”

“The same goes for prospective dates,” he added. “Chances are you’ll get ‘Googled,’ and pretty much everyone knows by now that the results of that search can have practical consequences for you, both good and bad.”

Prior to founding PeekYou in 2006, Hussey started the RateMy series of websites, which include sites such as RateMyTeachers, RateMyProfessors and RateMyFace.

PeekYou served five million people in February, up 300 percent in the past year, and Hussey said the company believes it will grow 10 times larger in the coming years, as its index continues to grow and improve.

PeekYou is now profitable but said it is considering options for a larger investment this year to keep up with demand.