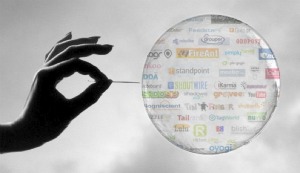 There is no bubble forming around Silicon Valley or tech startups because white-hot companies like Twitter and Facebook are able to show they have fundamental value and are capable of making money, Phil Black, co-founder at early stage venture capital outfit True Ventures told me today.

“There is no bubble at current moment. There are very successful Internet businesses being created that are growing very rapidly and are making a lot of pretax profit,” said Black.

The biggest red flag VCs need to worry about is when valuations seem out of whack with what investors understand about what the company actually does, he said.

“We need to worry about a bubble when there are businesses being valued at sky high prices with no underlying fundamentals,” he said. “Currently, any type of sky-high, bubble valuation dynamic is the exception and not the rule in the venture market.”

The company co-invests with angel investors around 80 percent, making angel-type investments, but also leading first-round investments and sometimes investing in all the subsequent rounds.

Although the hand-wringing continues over whether or not there is a venture capital bubble forming around trendy Silicon Valley startups, Black said that until valuations begin to act irrationally, he does not believe a bubble has even begun.

Other VCs have recently chimed in about the lack of a bubble, although the community seems split about the issue, with diehard proponents on both sides.

Still, Black said the business of venture capital continues as usual and will for the foreseeable future.

Right now, Black said VCs are most likely to be turning their attention to three main areas of growth as Silicon Valley continues to be an incubator for rapid fire innovation and increasing competition. “Everything that can be ‘socialized’ will be,” said Black. “Social media is working its way into the enterprise and the mobile app experiences at a rapid pace. The consumer experience is being socially optimized now. The second biggest area is location-based services. All this data is going to be geographically located. …  Third is the mobile experience. The mobile world is growing [in] leaps and bounds as the tablet market heats up and the iPhone/Android war continues.”

True Ventures’ portfolio currently contains tech darlings including Milo, GigaOm and Meebo. It recently closed a $2.5 million funding round for Orabrush, the YouTube phenomenon known for quirky videos about its tongue-cleaning product.

Thus far the firm has raised $375 million, and it currently invests out of its $213 million Fund 2, with between $250k and $2.5 million in the initial capital raises for early-stage technology companies.