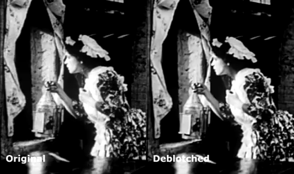 The site, which gets over  35 hours of video uploaded every minutes, says it hopes to use the technology by the Irish firm to improve the quality of the many blurry, jerky, and unsteady amateur videos uploaded to the site daily — as those shared recently, for example, by political protestors in Libya.

When a video is uploaded to the site, it is processed by YouTube and converted to the various sizes and formats offered by the site. The integration of this technology, which would act as an additional filter for restoring and improving quality, could be instrumental to the millions of YouTube users who watch and share videos on the site.

Green Parrot Pictures was founded by Anil Kokaram, an Associate Professor at Trinity College in Dublin, Ireland. Its technology, which improves video quality by offering tools to stabilize an image and remove flickers, noises, and blotches, has been used in movies such as Lord of the Rings, X-Men, and Spider-Man.

A couple weeks ago, the site also announced that it is buying Next New Networks, a video production and distribution company to help content partners an emerging talent. The price of both acquisitions have not been disclosed. MotionDSP‘s vReveal software can also sharpen and stabilize blurry videos.