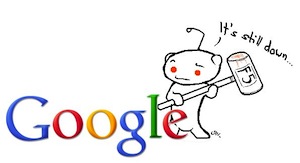 Link sharing community Reddit said goodbye to Senior Software Engineer Mike “Raldi” Schiraldi, who announced he was leaving the site after a “dream offer” from Google.

“At this point in my career, I want to work at a place where the programmers go all the way to the top, where the policies coming from HR and IT and everyone else are designed with nerds in mind, not magazine publishers,” Schiraldi said in his last post to the Reddit Blog.

As for what constitutes a dream offer from a company that ranks among the best in keeping their employees happy, Schiraldi told me he’s going to err on the side of caution and stay silent until he finds out from Google what he can and cannot say about his new position.

Obviously he’d be qualified to add Reddit-like features to Google’s own news gathering services. Regardless, it will be interesting to see what he can do under a management that supports and encourages his talents.

Schiraldi, who joined the staff in late 2008, is perhaps best known for his bold appeal to Reddit users for help when the site’s massive growth began outpacing available resources. Parent company Condé Nast made it clear that Reddit needed to produce higher revenue to justify hiring more employees and buying additional servers. Meanwhile, Reddit’s small team of four employees poured all their efforts into keeping the site from crashing instead of building new features that could make them more profitable.

Not content with being punished for their success, Schiraldi wrote a brutally honest assessment of their predicament and debuted Reddit Gold Subscriptions as a possible solution. Users provided the funds necessary under the promise that exclusive features would be added for gold subscribers when they were feasible.

Predictably, Condé Nast’s feathers were ruffled and Schiraldi probably took some heat, but overall the gutsy move paid off. The site has more than doubled its traffic since launching Reddit Gold — pushing over a billion page views in January alone.

“The one silver lining to this is that Raldi’s departure really opened up Condé’s eyes to what our needs are as a site that is different from all the other properties at Condé Nast,” said Reddit Operations Manager Jeremy Edberg in a comment thread. He added that they had just wrapped up a meeting with Condé Nast President Bob Sauerberg, who pledged additional resources, more funding and the approval to hire a larger number of employees than originally planned.

For now it seems the Condé Nast management shake up under Sauerberg’s direction, which moved the Reddit employees higher up in the management chain, is proving to be a very successful stride in the right direction.