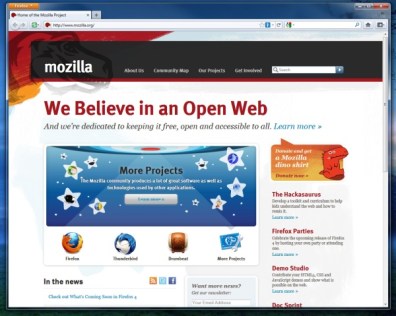 Good news for the Mozilla faithful: The final version of Firefox 4 is now available for download, a full day ahead of its official March 22 release.

The Firefox update couldn’t come soon enough, as the browser has been getting trounced by Google Chrome for the past two years, both in terms of speed and features. Chrome is notorious for kick-starting the current speed obsession among browser makers. And as web applications have become more complex and increasingly reliant on JavaScript, they’ve also become increasingly dependent on faster browsers. Now Mozilla finally has a blazing fast browser to fight back against Chrome.

You can download the final Firefox 4 build on Mozilla’s FTP site, or directly for Windows, Mac OS X, and Linux.

Firefox 4 brings with it a completely new interface that, like Chrome and the recently released Internet Explorer 9, aims for minimalism. Gone are the clunky menus and toolbars of past Firefox versions, and in their place there’s a Firefox drop-down menu, tab bar, as well as location and search bars. Firefox 4 is certainly sleeker than what came before, but it’s surprising that it still looks less elegant than IE9 or Chrome. Part of that may be due to Mozilla keeping separate search and location bars — a curious decision since Chrome has proven you can easily use one bar for both functions.

The browser has also gotten much faster thanks to JaegerMonkey, an improvement to Firefox’s SpiderMonkey JavaScript engine. That means Firefox 4 will be able to better tackle sites that rely heavily on Javascript like Facebook and Gmail. In benchmarks of the Firefox 4 Release Candidate (a not-quite final version), Mozilla’s browser still lagged behind the latest version of Chrome, which dovetails with what I’ve seen of the browser in everyday usage.

Mozilla also added hardware acceleration into Firefox 4, which will use your computer’s video card to speed up webpage rendering. It’s fully enabled on the Windows version of Firefox 4, while the Mac version will only get a few elements accelerated. Hardware acceleration is a feature Microsoft made sure to add into IE9, and Google is still testing it in Chrome 10 (although it’s very easy to enable).

Another useful addition to Firefox 4 is Tab Groups (a feature that was originally called Panorama). It gives you a graphical overview of all of your tabs, similar to Exposé in Mac OS X, which you can then use to gather together tabs in specific groups. You can use Tab Groups to keep your collection of work tabs separate from your social media browsing, for example. Ultimately, it’s meant to help you avoid crowding your tab bar, and it may also remove the need to keep multiple Firefox windows open (a purpose that tabs were originally meant to serve).

Mozilla is definitely playing catchup here. Firefox 4’s faster JavaScript engine has been a long time coming, and synchronization is something that Google has been building up for years now in Chrome. But new features like Tab Groups prove that the open source browser maker still has some fight left in it.