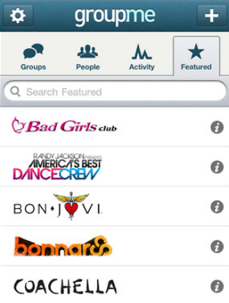 One of the leaders in a brat-pack of group messaging startups, New York-based GroupMe, has just launched its first attempt to monetize its service. It is adding “Featured Groups” to the service to draw in advertising dollars.

Somewhat reminiscent of Twitter’s “promoted trends”, the startup will now enable brands to show up in a “Featured” tab on its iPhone and Android applications, where fans will be able to create groups under those featured brands and opt in to receive news, offers, contests, and reminders. Case-in-point: my friends and I are planning to attend the Coachella music festival, so we create a group for us under Coachella’s featured group.

These brands, which range from TV shows like MTV’s “America’s Best Dance Crew” to the singer Bon Jovi, as well as the Bonaroo and Coachella music festivals, are essentially partnering with GroupMe as advertisers. Since fans opt in to the branded groups and generate conversations and banter about the brands, it could be quite an appealing option for brand marketers .

GroupMe tested out something similar at the SXSW conference earlier in the year: It let conference attendees create groups and receive updates from that group. The service was actually one of the most talked about among a slew of messaging services at the conference. Now, it’s looking to use the same concept to crystallize a business model — the earliest of its contemporaries to try to do so. Will this move be enough to get the big bucks coming in?