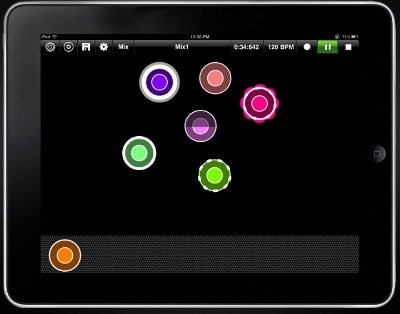 If you’ve ever dreamed of leaving your desk job and starting anew as a DJ (which isn’t unheard of these days), Shapemix for the iPad will get you started.

Shapemix ($4.99 on the iTunes App Store) takes advantage of the iPad’s multitouch interface to let you mix music in “visual space,” instead of dealing with the complexity of professional mixing software. Shapemix is one of those apps that makes tablets seem like less of a fad and more of a legitimate computing platform — that’s why we’ve selected it for VentureBeat’s Mobile App Spotlight, where we highlight cool new apps.

While Shapemix is certainly no replacement for pro solutions, it’s a cheap and simple way for anyone — from kids and novice musicians, to more experienced types — to dabble in music mixing.

The app comes preloaded with two songs to help you get your bearings with its interface, as well as over 100 free tracks that you can use to create your own songs. The tracks include instruments like drum beats and guitar solos, and you can also customize them with reverb, delay and other effects.

Shapemix’s interface is one of its most compelling features. The Mix view lets you view the individual tracks as colored circles, which you can move up and down to control the volume, and left and right to control left and right stereo panning. The Time view is a more traditional audio timeline, except with full touchscreen support.

Once completed, mixes can be published to Shapemix’s website or Facebook. It’s a shame the app doesn’t offer you a standalone audio file to share with friends, but I’m sure intrepid users will find ways around that. The company says that eventually the app may allow users to download their tracks. Users can also download additional tracks and songs at Shapemix’s website. More songs and tracks will be headed to the app as well thanks to a partnership with Downtown Music Publishing.

The app, which came out of Legion Enterprises’ incubator program, was developed by musician and RISD graphic design professor Colin Owens, who in a former life was frontman for the techno band “Blind.” The company tells us that Owens spent years developing curriculum that brought together visual artists and designers, and he also spent a significant amount of time researching audio software tools. Before the iPad was released, he had to make do with a Korean touchscreen device to develop the core concept of Shapemix.

Want to have your mobile app featured like Shapemix? Then submit it to our Mobile App Spotlight!