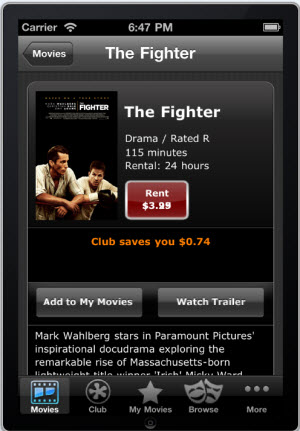 Netflix has made a big splash with its library of movies for low, fixed monthly subscription fees. Now mSpot, which provides streaming movie services for a bunch of big carriers, is offering similar monthly deals with its low-priced mSpot Movies Club for streaming movies. But mSpot’s interesting trick is that it plans to offer more recent movies than Netflix does at similar prices.

The strategy is interesting. If it works, mSpot’s many partners could become a lot more competitive against Netflix in the streaming movie market.

Daren Tsui, chief executive of Palo Alto, Calif.-based mSpot, said in an interview that mSpot has been able to secure new release movies on the same day that studios release them on DVDs. Netflix, by contrast, has to wait as much as 28 days.

The studios release movies at the theaters first, where moviegoers pay top dollar. Then they release them on premium pay TV services such as HBO, iTunes and on DVD movie discs. Lastly, they release them to Netflix, which offers thousands of movies for a fixed subscription rate on DVDs and via streaming video. By getting films on the same day that DVDs are launched, mSpot is trying to get in line ahead of Netflix. (We’ll see if that works, given Netflix’s attempts to pay for original content.)

“We think the idea of waiting for a DVD to show up at your house is old school now,” Tsui said. “Netflix’s problem is that it does not offer new releases as streaming videos. We can do that.”

And the way mSpot does that it by charging a la carte fees for its movies. In the past, it charged $3.99 per movie. But as part of the mSpot Movies Club, mSpot will now charge only $1.99 to $3.99 per a la carte movie. Tsui says the company will get by on a lower profit margin. But users can get the better deals on movie pricing by purchasing prepaid credits for a select number of rentals every month.

In some ways, that pretty much matches Netflix. You can get as many movies as you can watch from Netflix, but in reality you probably only get to watch five or six for your fixed subscription fee. If you stream an mSpot movie to your PC, you can watch it there and pick up where you left off on an iPhone or vice versa.

mSpot has managed to get wide distribution. It is available on the PC, Mac, 10 mobile carriers and 50 handsets. But so far it has only 6 million subscribers across all of its partners. With the new pricing plan, Tsui says the company hopes to change that and catch up with Netflix, which has more than 20 million users.

mSpot also offers a cloud-based music service for Android devices, iPhones and computers. mSpot was founded in 2004 and has 68 employees. Its customers include AT&T, Verizon, Sprint, and others. It has raised $2.3 million from Trinity Ventures.