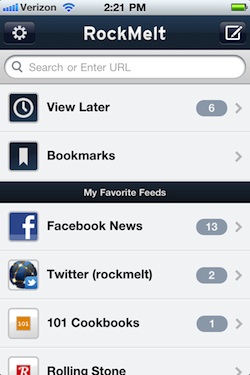 RockMelt launched last November with the promise of a new browser that’s better-suited to the way people use the Web today. Now it’s announcing an iPhone application that takes a similarly fresh approach to the mobile Web.

Most mobile browsers provide a similar experience to PC browsing, just with a touch interface and smaller screen. But RockMelt co-founder and chief executive Eric Vishria pointed out that when you’re waiting in line for a cup of coffee, you don’t want to whip out your phone and type in a long website address. Instead, you’re more likely to check the latest updates on Facebook or Twitter.

So yes, RockMelt for the iPhone supports the Web search and browsing experience, but that doesn’t seem to be its focus. Instead, Vishria said his team built exactly what users were asking for — a mobile version of RockMelt’s “App Edge”, where you can see updates from your favorite websites. In the RockMelt app, you can see a list of those websites, determine which ones have been updated, and then jump in to read the latest news or blog post. Users can also save web pages to read later, using the new “view later” feature that RockMelt announced earlier this month.

Now, you could do most of this stuff on your phone already, using social networking and newsreading apps. But RockMelt brings all these activities together in one place — Vishria (who is obviously biased, but hey) said that since he started testing RockMelt on his iPhone, he found that he doesn’t really need his other apps anymore, except for email and Angry Birds.

The app is not yet available in the Apple App Store, and RockMelt will only say that it “expects the app to be available in the app store in the coming days.” RockMelt has raised $9.9 million from Andreessen Horowitz and others.

Update: The app is now available for download here.