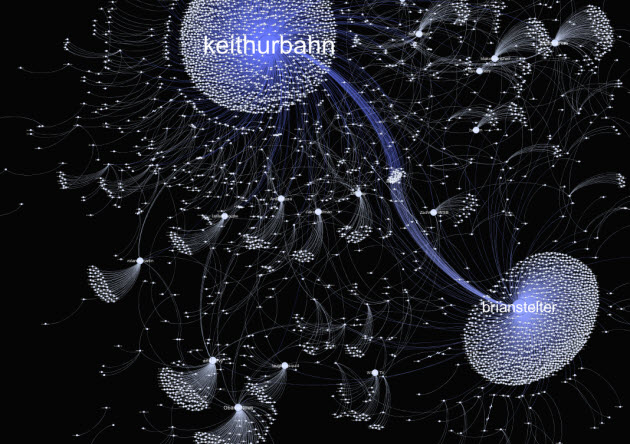 Keith Urbahn’s tweet that Osama bin Laden had been killed will likely live on throughout history. As you can see, the visual representation of the tweet’s impact shows just how it spread last Sunday night. It was the first announcement of bin Laden’s killing — one little message set a firestorm of awareness across the internet.

As we noted before, no other medium captured the action as it was happening, although users on Facebook may also have conversed about the raid as it was happening. If anything, this series of tweets will probably show how Twitter had its true “CNN moment,” much like the 1990 Gulf War opening was captured by CNN. 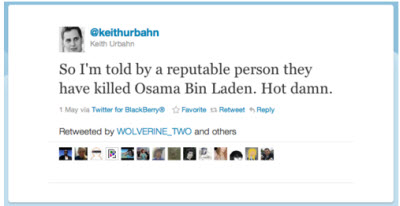 On May 1, White House communications director Dan Pfeiffer tweeted first, saying at 6:45 pm Pacific time that President Obama would address the nation at 7:30 pm. Just before that, at 7:25 pm, Urbahn, the former chief of staff to former defense secretary Donald Rumsfeld, tweeted, “So I’m told by a reputable person they have killed Osama bin Laden. Hot damn.” At the time, Urbahn had a following of 1,016 fellow Twitter users.

Within a minute, 80 people had retweeted it. One of those was New York Times writer Brian Stelter, who has more than 50,000 followers on Twitter. Within two minutes, 300 reactions to the post were spreading, SocialFlow reported.

Of course, Urbahn wasn’t the first to tweet about the incident. That honor goes to Sohaib Athar, an information technology manager at Really Virtual. He liveblogged about the firefight at Osama bin Laden’s compound. Athar goes by the handle @ReallyVirtual on Twitter.