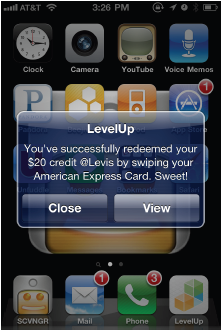 LevelUp, a pilot in the local deals space created by check-in app Scvngr, today announced a partnership with American Express to give users the ability to redeem deals with their credit cards, eliminating the need for printed coupons or showing your phone at the point of sale.

Essentially, consumers will be able to connect their American Express cards to LevelUp and be able to redeem in-store deals.  Once connected, users can simply swipe their cards at the point of sale and the deal will be immediately redeemed and show on the sales receipt.

The first brand to launch with this functionality is Levi, which will offering progressively valuable offers on $10 purchases in several cities, including San Francisco, Boston and Philadelphia. Though only one store in each city will have the functionality working immediately, probably for testing purposes.

The functionality works using American Express’s Smart Offers API, which was actually debuted with Foursquare at South by Southwest Interactive to redeem merchant offers without coupons, special codes or showing a phone. The two companies plan on rolling out the functionality in the months ahead.

LevelUp is a funded pilot from the founders of Scvngr, a service that asks users to check-in to physical locations and complete activity challenges for incentives.