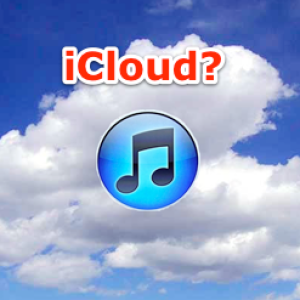 Components of the iCloud service will be free and will store much of a user’s content — music, books, photos, contacts, calendars, and more — and wirelessly push it to all their iOS devices. The service will also back up each user’s important data once a day.

Another huge announcement was the introduction of iTunes in the Cloud, a revamped version of iTunes with cloud functionality, and iTunes Match, a $25-a-year-service that will match every song in your iTunes library and let you download those songs on any device.

“We’re going to demote the PC and the Mac to just be a device,” Jobs said. “We’re going to move your hub, the center of your digital life, into the cloud.”

The first three cloud-based apps with the service are mail, contacts, and calendar. Those three apps were previously part of the $99 a year MobileMe service, but will now be free.

Documents lets you use Apple’s office products Pages, Numbers, and Keynotes will cloud functions. For example, if you create a Pages document, the app will upload and store it in the cloud and push it to all your devices.

The Photo Stream app lets you automatically push photos to your other iOS devices. When you take a photo on an iPhone outside, you can go home and all your photos will be on your iPad. Photo Stream will be built into iPhoto on the Mac, which connects the Apple ecosystem of products even further. Apple will store the last 1000 photos you take on your device, while a Mac or PC will be able to store all photos. One weird thing that Jobs mentioned with the Photo Stream app is that photos will only be stored on Apple’s server for 30 days.

Finally, Jobs talked about iTunes in the Cloud. With the push of a button you can download any song you’ve ever downloaded from iTunes to any device at no charge. This announcement is huge because for the first time, you will be able to make a single purchase and download the song to multiple devices at the same time with ease.

A final, and huge, component of iTunes in the Cloud will be iTunes Match, a $25-a-year service for grabbing any song from the cloud that’s already in your library. Instead of uploading to the cloud or buying new versions of songs you already have, iTunes will scan your library and allow you to download your music collection to any iOS device anywhere you have an Internet connection.

Apple pointed out that only Amazon and Google have offered their own cloud music services, but both require the user to upload his or her entire collection to be able to listen to it on the Web. iTunes Match doesn’t require uploading of songs to get tracks in the cloud.

Another cool feature of iTunes Match will be that songs will download onto iOS devices at 256 kbps AAC, even if the song was originally added to an iTunes library at lower quality.