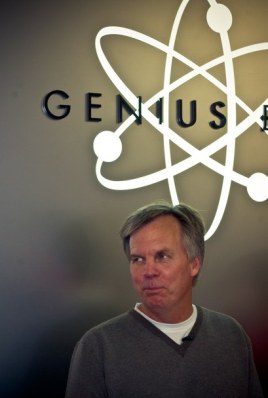 Ron Johnson, the man who made Apple’s retail ambitions a reality as senior vice president, has been tapped by department store chain JCPenney to become its new chief executive.

Over the past 11 years at Apple, Johnson helped the company launch over 300 stores worldwide while redefining what consumers can expect from their retail experience. JCPenney is surely hoping that he’ll bring some of that magic to its 1,100 stores.

Johnson will succeed current JCPenney CEO Myron Ullman on November 1, 2011, who will then go on to become executive chairman of the company.

For Apple stores, this move may not mean much. Johnson has already set Apple’s retail plans into motion with staggering success. At this point, all Apple needs to do is keep the ball rolling. The company is “actively recruiting” for a replacement retail head, Business Insider reports. For JCPenney stores, though, the potential for change is huge. Expect Johnson to integrate technology and reshape the stores to look completely different from competitors like Macy’s.

“I’ve always dreamed of leading a major retail company as CEO,” Johnson said in a press release this morning. “I am thrilled to have the opportunity to help J. C. Penney re-imagine what I believe to be the single greatest opportunity in American retailing today, the Department Store.”