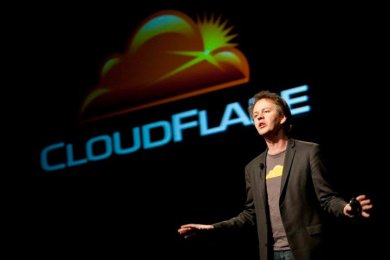 CloudFlare is on fire. The plucky startup, which aims to speed up and protect any website, announced today that it has added seven additional data centers in the US, Europe and Asia. CloudFlare now boasts a total of 12 data centers around the world “at the Internet’s strategic points.”

The additional data centers will allow CloudFlare to better serve sites all over the world. And given the company’s ridiculously explosive growth, it certainly seems like it will need the extra hardware. CloudFlare also announced today that sites protected by its network reach more than 5 billion page views a month and serve traffic to 15 percent of the world’s total Internet users.

To give you a sense of just how fast Cloudflare is growing, when we reported on the company last month, it had 3.5 billion monthly page views and serviced 12 percent of Internet users.

“We’ve been able to scale so quickly because we’ve designed our own specifically tuned hardware and networks from the ground up,” CEO Matthew Prince (above) said in a statement. “For those who like buzzwords, we’ve essentially built our own ‘special-purpose public cloud’ that doubles the speed of the average website and stops network threats before they even get to a client’s data center.”

In a conversation last week, Prince attributed the company’s massive growth to a huge need CloudFlare is addressing. Everyone wants their website to be as fast and secure as possible, and if you’re not able to optimize the code yourself, why not let a service like Cloudflare do it for you?

Prince said the company had just five data centers when it launched in September 2010, which served more than 100 million page views. New data center locations include Los Angeles, New York, Paris and Hong Kong. Several previous data centers have also been updated with new hardware. CloudFlare says the data center locations were chosen specifically so that they’re within a few hops of 99 percent of the world’s Internet users.

The Palo Alto, Calif., company has raised $2.05 million in funding so far.