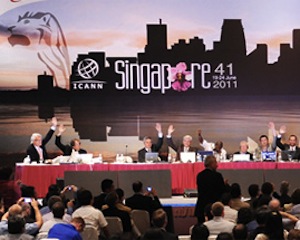 ICANN, a nonprofit overseeing IP address spaces, voted Monday to approve extending the number of available top-level domain extensions, or TLDs. No longer will companies and organizations be restricted to the 22 existing extensions like .com, .edu, .org.

The move marks the biggest change to Internet addresses in nearly four decades. It means companies and other organizations can apply to turn their brands into an internet domain extension, such as “.iPad” or “.Prius”. But it won’t be cheap. Applications for a new TLD will cost an estimated $185,000, according to ICANN’s Frequently Asked Questions page. If approved, there is also an annual $75,000 maintenance fee.

The application process will run from January to April 2012. ICANN, which plans to launch a global campaign to raise awareness of the new TLDs, anticipates between 300 and 1,000 new TLDs could be created under the new application program per year.

ICANN’s plans to lift restrictions on generic TLDs began formulating in 2008. The organization said it felt that expanding the domains would offer people new ways to express themselves and massively increase the “real estate” of domains available for commercial use.

It’s not clear how many companies will feel having their brands as domain names will be worth the costs. While large companies like Google and Coca-Cola may want to snap up a uniquely branded TLD, cyber squatters aren’t likely to participate. ICANN’s lengthy and expensive process should keep only well established brands and organizations in the running for a new domain extension. But it could also deter smaller companies from participating.