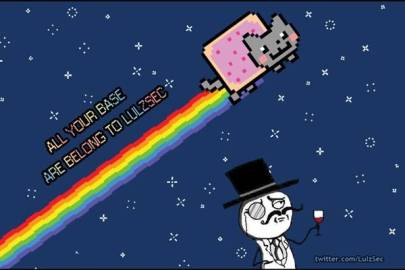 Hacking group LulzSec, which surprisingly has become a part of the daily news cycle, has denied any involvement in a reported hack on the UK 2011 Census. “That wasn’t us — don’t believe fake LulzSec releases unless we put out a tweet first,” the group wrote in its Twitter account.

Last night, an upload to the anonymous document posting site Pastebin claimed that LulzSec had acquired the UK Census records and was “keeping them under lock and key.” LulzSec pointed out that anyone could copy and paste the text design of the group’s official releases. The group wrote in a followup tweet: “But hey, if someone out there hacked the UK government in the name of #AntiSec [anti-security], well done sirs!”

With corporate and government hacks on the rise, we can expect to see even more false claims in the future.

Meanwhile, Ryan Cleary, a 19-year-old UK man, has been arrested for his suspected involvement with LulzSec. “The teenager was arrested on suspicion of Computer Misuse Act, and Fraud Act offences and was taken to a central London police station, where he currently remains in custody for questioning,” the Metropolitan Police wrote in a news bulletin last night. The authorities went on to say that searches at Cleary’s Wickford, Essex home have revealed “a significant amount of material.”

Channel 4 news reported that Cleary was the “mastermind” behind LulzSec, but the group quickly put a stop to that misconception on Twitter: “Seems the glorious leader of LulzSec got arrested, it’s all over now… wait… we’re all still here! Which poor bastard did they take down?” An admitted member of LulzSec also claimed that Cleary had little to do with the group, aside from running its IRC channel.