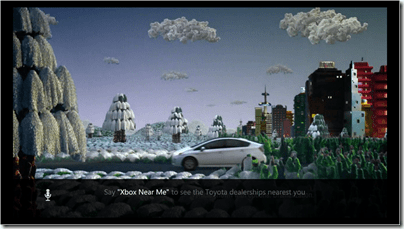 Today Microsoft promised to transform TV advertising into an interactive experience, unveiling the highly anticipated ad platform for the Kinect called NUads. The platform uses the voice and gesture controls of Kinect for the Xbox 360, and will allow people to interact with television commercials as early as Spring 2012.

“I try to avoid hyperbole,” said Microsoft’s Mark Kroese, who oversees advertising for entertainment and devices. “But in this case of NUads and Kinect, I’m here to say that it will change television as we know it—forever.”

Kroese, blogging today from the Microsoft Advertising Business Conference at the Cannes International Advertising Festival, said advertisements placed across the Xbox LIVE experience will respond to various voice commands and motions. For example, viewers can vote in real time for a product or service by waving their hand, schedule a calendar reminder for an upcoming TV show, or say “Xbox Near Me” to see a map with directions to a nearby car dealership (shown in the picture to the left).

He explained that while television ads reach a broad audience, it has remained “stubbornly passive and one-way” for advertisers desiring an interactive experience, unlike PC and mobile interactive ads.

“People are inherently interactive all on their own,” wrote Kroese. “We just needed the technology to get out of their way.”

Launched in the winter of 2010, Kinect holds the Guinness World Record of being the “fastest selling consumer electronics device”. Microsoft announced in March 2011 that 10 million sensors had been sold worldwide.

NUads’ release was first officially reported by Tanzina Vega of the The New York Times.