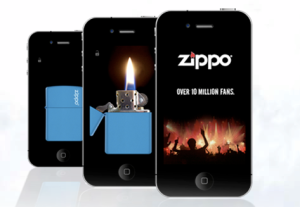 At first glance, the news that the maker of an iPhone app that simulates a Zippo lighter received $2.6M in funding sounds like a joke.

Said company, Skyrockit, received the funding from Intel Capital to enhance what it calls its Mobile Entertainment Studio.

This studio includes the dubious centerpiece of Skyrockit’s offerings, the Zippo lighter app, along with the somewhat more sophisticated Romplr app. Romplr is a music remixing app that allows people to mix free and purchasable songs, which listeners in the Romplr community can then rank. The app is available in 95 countries and has 1.1M users. The user interface for Romplr is colorful, inviting and easy to master, though there are complaints about bugs and crashes on its Apple appstore page.

To Skyrockit’s credit, big brands have formed partnerships with the company, indicating that they see some value in its apps. Names like Zippo (obviously), GAP, VitaminWater, Kraft Foods, A&E, NBC and more utilize Skyrockit to create engaging mobile products, expanding outside the app realm, for their campaigns.

These initiatives include an app for the NBC show The Biggest Loser, Intel’s “Postcards from the Future” app, an eBook for Kraft’s “spread a little joy” campaign and the ever popular Zippo lighter.

“Given Skyrockit’s track record with Fortune 1000 brands, and their IP portfolio, they are in a unique position to deliver on big ideas in mobile,” said Mark Kingdon, ex-CEO of Organic and Linden Lab, which created the virtual world SecondLife.

Skyrockit’s real value is in its ability to take big names mobile in a simple, user-friendly way. On its own, the Zippo 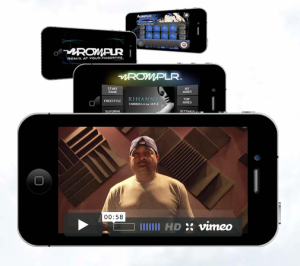 lighter is ridiculous and probably frowned upon by anti-smoking lobbyists and mothers of pyro children. As a marketing campaign, however, it is pretty effective. The app is simple, recognizable and novel. After hitting 15 million users, perhaps we can consider the app the manifestation of some kind of evil genius rather than merely annoyingly successful.

Same goes for the Intel “Postcards from the Future”, which allows you to send a photo of yourself with an added mustache or futuristic friend over the top of the photo.

Whether Skyrockit is able to develop game-changing technology is yet to be seen, but if it keeps to the simplicity that broad-audience marketing demands, it could make sense to throw money into the machine.