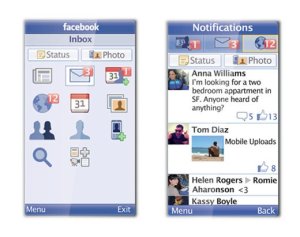 Facebook is aiming to boost international usage with the debut of a new “Facebook for Every Phone” app, which offers full access to the social network on over 2,500 mobile phones across the globe. The company’s mobile team announced the new app in a blog post today.

While the company is estimated to have 750 million active monthly users, some speculate that user growth in North America is slowing or even in decline. However, Facebook usage is growing in other countries, which could be why the company is focusing on this new app for feature phones.

The new Facebook for Every Phone app gives users access to the news feed, contact lists, messages and photo sharing. The photo sharing functionality is particularly robust — allowing users to upload, comment on and edit photos straight from their phones. Right now it’s only available on Java-enabled phones, but support for more devices will be provided in the future, the company said.

The app is also optimized to use a minimal amount of data to keep the Facebook experience inexpensive in areas where high-speed data plans are either expensive or not readily available.

To give people an added incentive to try it out, Facebook is working with 20 different wireless carriers in 13 different countries to provide free data consumption for the first 90 days that the app is in use. The company is hoping three months on the social network will be enough to keep people using it, despite the added cost.

If Facebook can provide an attractive communication experience that uses as much data as SMS and e-mail messages, it will have succeeded in making its social network indispensable to a whole new market of consumers.