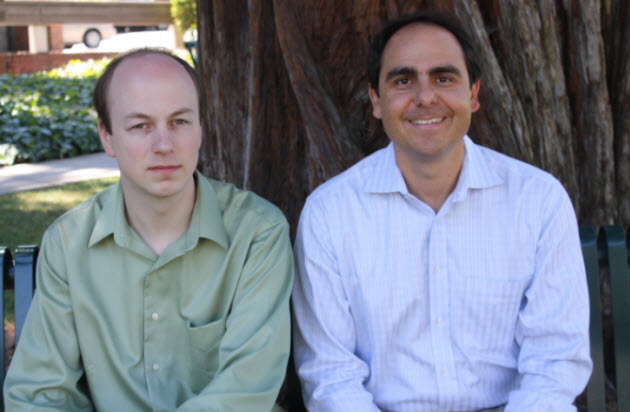 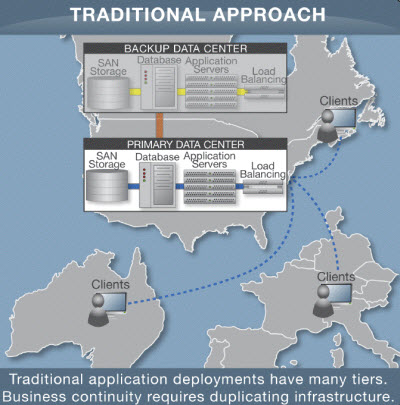 After four years of redesigning how enterprise databases store and access data, the company is now ready to take on customers. If Translattice succeeds with its plan for putting enterprise applications on its distributed computing platform, the centralized databases of corporate giants such as Oracle and IBM are doomed.

Frank Huerta (pictured, right), chief executive of Translattice, told VentureBeat that his company has created a modern architecture that supports geographically-dispersed companies with a need for cloud, hybrid, and enterprise applications. The platform processes enterprise applications and stores data nearest to the locations where it is needed in a far-flung corporation.

“Depending on the configuration, we believe we can cut costs as much as 60 percent and reduce the risk of outages, which can cost $5,000 a minute,” Huerta said. “If you lose one site with us, you move over to another location and the system reconstitutes itself.”

The whole point of Santa Clara, Calif.-based Translattice is to create an elastic computing system where an enterprise can store data in the computers where it’s needed most. The distributed relational database isn’t stored in one location; it is distributed in many locations. 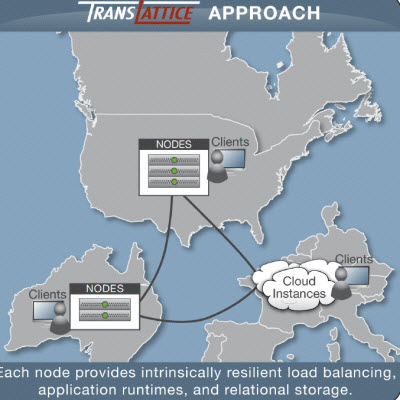 Too often, multinational corporations have to store their data in a centralized database at headquarters, even though the people who need that data are in overseas offices. With Translattice, that data is stored in small-scale network nodes that back each other up. Data for the German office of a big company is therefore stored in Germany and it can be backed up in another nearby European office. If the German office computers go down, retrieving the data is pretty easy.

By contrast, data stored in big centralized data centers is often a continent away and accessing it or changing data is a slow process, like waiting five days for a check to clear at your bank. In addition, the data has to be backed up in an expensive data center that mirrors the data in the main data center. That’s wasteful, says Michael Lyle (pictured, left), chief technology officer at Translattice, in an interview.

“Our system is scalable and resilient,” Lyle said.

The Translattice Application Platform 2.0 can dramatically improve the availability of transactional applications — such as a bank’s centralized database — for both on-premise and cloud environments. That means it works well for applications that are executed inside your building, or for those that retrieve data from a remote cloud. And it means that mobile users don’t have to wait forever when accessing an enterprise application. 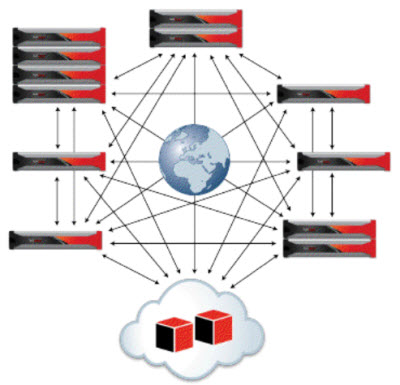 Lyle said the system also works better for policy control. For instance, in Germany, a multinational company cannot legally move customer data — which is considered private information — out of the country and store it in a centralized data center somewhere else. With a simple policy setting, Translattice can comply with such rules.

The technology is built on what the company calls its Lattice Computing architecture, which enables a series of network nodes to mimic each other and perform the functions of a centralized data center. For instance, 20 network nodes around the world could store slices of a centralized database, and those nodes can back each other up. Lyle says this architecture is a lot simpler than the centralized model, which tends to get stacked with so many layers of software that it runs too slowly from remote locations. If the centralized computers suffer an outage, applications can go down for hours or days.

Anne MacFarland, an enterprise expert at MacFarland Consulting, said people have talked about the benefits of distributed computing for years but no one has delivered on that promise. But she says that Translattice has the potential to “fundamentally change the economics of data and application access.” 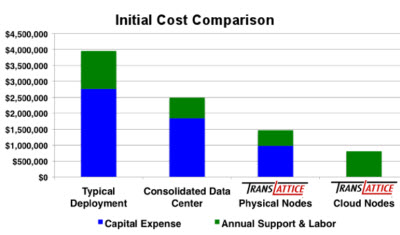 With Translattice, the database, application server, load balancer, and storage are all tightly bound together in a single network node that consists of a bunch of Intel-based appliance servers. Those nodes can be placed anywhere in the world. If one fails, the users on that node are automatically redirected to a working node. To get more storage or computing capacity, the company simply adds more commodity appliances.

Translattice’s software runs on standard Intel data center computers known as servers. Each server has eight processors, a bunch of hard disks, a lot of memory, and Translattice’s software. Translattice sells these servers to enterprises, which sprinkle them around their various geographic locations. These servers are standard building blocks in a utility, where computing power can be added very simply in a plug-in manner.

Brad Buhr, CEO of Iomaxis, said his company is working with Translattice to help deploy the system to his customers.

Translattice said it expects to seek a second round of funding in the second half of 2011. The company was founded in 2007 and formally unveiled itself in 2010. It raised $9.5 million in a first round of funding from DCM, a leading early stage investment firm.

Lyle said financial services firms, such as big banks with dispersed sales organizations, will likely be the first customers. Huerta also said the disaster in Japan prompted a lot of inbound queries about disaster protection.

Huerta and Lyle worked together a decade ago in a successful startup, Recourse Technologies, a security technology firm that was bought by Symantec. Recourse made “honey pots,” which were traps where enterprises could corral hackers and watch what they were trying to do as they broke into a company’s computer network. I wrote about them in the Wall Street Journal back in 1999. Symantec bought them for $153 million in 2002.

Huerta went on to become chief executive of medical devices firm Cartilix, while Lyle stayed for a time as chief architect at Symantec and then became an entrepreneur-in-residence at DCM before starting Translattice in 2007. Huerta and Lyle are joined by a number of other Recourse employees, including Robert Geiger, who is also a co-founder and is serving as vice president of engineering.

Rivals include big server and database vendors such as Hewlett-Packard, Oracle, IBM, Dell and others.