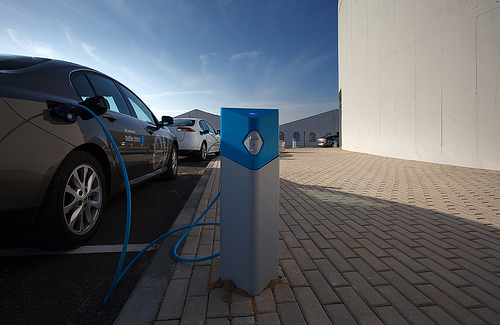 The “Level 2″ 240-volt chargers can charge an electric car like the Nissan Leaf to an 80-percent charge in around 3 hours. SolarCity sells the chargers outright, but gives their solar leasing customers a discount. So residents who lease solar panels are essentially getting subsidized electric car chargers that are priced below market value.

There are two other types of electric car chargers — a low-volt Level 1 charger and a super-fast 480-volt charging station that can charge an electric car much more quickly.

“We’re doing level 2 today, this is our announcement, but we’ll be open to using additional chargers in the future,” Bass said.

SolarCity leases residential solar panels for a 15-year period, handling all the maintenance during the life of the lease. The electricity generated by the panels powers homes directly, taking some load off the electric grid. The company works in the “distributed solar” space, which is designed to help reduce some of the strain on power grids during peak usage hours when homes are drawing more electricity for air conditioning or, in the future, electric car charging.

The company also works with home owners to introduce a number of other energy efficiency tweaks as part of a program it started in 2009. For example, homeowners can hire SolarCity to install more efficient lighting and cooling services and seal up air ducts for better insulation.

Google recently created a $280 million fund for residential solar power projects run by SolarCity. The fund gives SolarCity the capital it needs to create more reasonable financing options for homeowners who are interested in installing solar panels on their roofs but don’t necessarily have the cash to buy panels outright. SolarCity is also raising $42 million in its most recent funding round.