This past quarter has been very good to Apple.

The company is now the world’s number one smartphone vendor, beating out both Nokia and Samsung, research firm Strategy Analytics announced this morning.

Additionally, Apple’s $76 billion cash war chest is even greater than the U.S. government’s current operating balance of $74 billion, the Financial Post reports. I’m still trying to wrap my head around this one.

“We had previously reported on Apple becoming the largest smartphone vendor in terms of revenue and profits,” wrote Strategy Analytics senior analyst Alex Spektor. “Now, just four years after the release of the original iPhone, Apple has become the world’s largest smartphone vendor by volume with 18 percent market share. Apple’s growth remained strong as it expanded distribution worldwide, particularly in China and Asia.”

The Financial Post points out that Apple’s cash reserves and the government’s number aren’t directly comparable — the U.S government’s operating balance symbolizes how much room it has left before hitting an arbitrary debt ceiling. Still, it’s hard not to compare the figures, especially as the debt crisis in America has become something of a political fiasco.

Horace Dediu over at the market analysis blog Asymco notes another feather in Apple’s cap during the last quarter: The company captured two-thirds of all available mobile phone profits in the quarter, up from 57 percent in Q1 and 50 percent in previous quarters.

“Three companies which captured 11% of the profits before the modern smartphone era started (four years ago!) now capture 84% of the profits,” Dediu wrote. 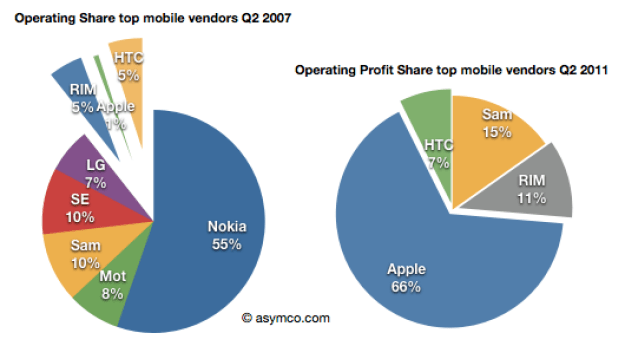