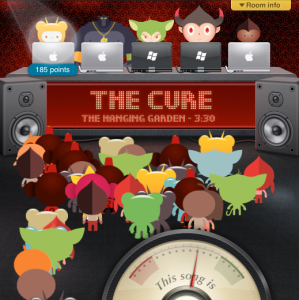 Music-sharing service Turntable.fm is close to signing a new $7.5 million round of funding led by Union Square Ventures, reports BetaBeat.

Turntable.fm has been on a hot streak since its launch in late May and has reportedly denied many interested investors while looking for the best partnership.

The startup decided against Kleiner Perkins and Accel as major investors because of possible conflicts of interest, according to the report. Both venture firms have deep ties to Facebook, which many speculate is working on its own streaming music service.

Union Square Ventures, however, has deep ties with microblogging social network Twitter, which generates a lot of attention for Turntable.fm.

Ironically, Turntable.fm exclusively uses Facebook Connect for login purposes — meaning a person must have a Facebook account to gain access to the site. If Facebook does launch its own music service, it will be interesting to see how Turntable.fm reacts — especially if the investment deal with Union Square Ventures becomes official.

Previous reports indicate that most of Turntable.fm’s initial investors —  Polaris Venture Partners, Mitch Kapor, First Round Capital, Lowercase Capital and others — will also participate in the new round. If true, the new round would bring the startup’s total funding to $9.1 million with a $40 million valuation.

Turntable.fm has a very innovative way to make listening to music a social experience. The service turns its users into DJs who can share musical tastes within specific virtual rooms classified by subject or  genre. Users vote on songs played by up to five DJs, which determines if the song keeps playing or skips to the next track.

Additional capital is definitely necessary for Turntable.fm to compete against other music startups such as Pandora, Slacker Radio and Spotify. But more importantly, Turntable.fm must ensure it can qualify as a non-interactive streaming radio service, which would give the company DMCA protection by the Copyright Act of 1998.

By contrast, interactive streaming services, like Spotify, are required to secure often expensive licensing rights from record labels. An interactive identification would severely cut into Turntable.fm’s ability to generate revenue.

While the startup did reach an agreement with major music label BMI July 21, financial terms were not disclosed.

Turntable.fm has more than 300,000 registered users since launching in May. The startup was founded by Seth Goldstein and Billy Chasen, who previously created Chartbeat and Stickybits. It raised initial angel funding from Chris Sacca.

Turntable.fm did not respond to VentureBeat for comment about the funding.