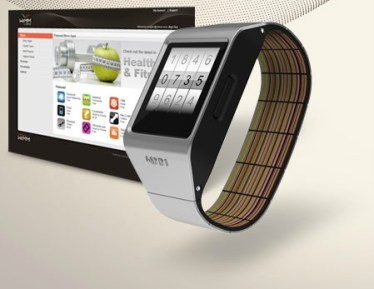 Wearable computers will be the next big thing, at least that’s what WIMM Labs is hoping.

The Los Altos company unveiled its Android-based wearable computing platform today, which is driven by a one-inch by one-inch Module that will serve as the centerpiece for WIMM’s “micro apps.” The tiny device can be embedded in many consumer products, including watches and keychains, and the platform will serve as an easy entry for developers interested in wearable computing.

“There’s an increasing demand for digital experiences that are faster, easier and more relevant,” WIMM CEO Dave Mooring said in a statement today. “WIMM Labs integrates information into your daily life in the form of useful, subtle glances.”

Yes, it looks like an iPod Nano (which can also be transformed into a high-tech watch), but WIMM’s solution differs since it was made with wearable computing in mind. WIMM’s Module features a 1.4-inch capacitive touchscreen, Wi-Fi, Bluetooth, magnetometer and accelerometer. Oh, and it’s waterproof, too.

You won’t be reading your email on such a small screen, but it allows for a new wave of always-on computing applications — like serving as a heart-rate monitor — that’s difficult to achieve with current devices. WIMM’s devices could also serve as a quick way to read information from your phone without actually pulling it out of your pocket or purse. Conceivably, calendar alerts and text messages could appear on the device. The company is already working with a handful of developers to create apps for the platform and will release a developer kit in a few weeks.

WIMM’s wearable platform isn’t being marketed directly to consumers, instead it has partnerships with other manufacturers to bring WIMM-powered devices out by the end of the year. Once licensed, the devices could sell anywhere from $200 to $2000, Engadget reports.