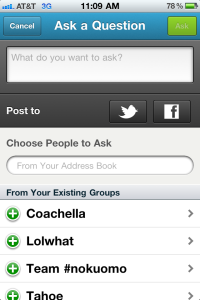 I have a bit of a crush on group-texting application GroupMe, which lets a bunch of phone owners jump into an ad-hoc chat room that’s powered by text messages. It’s simple, and best of all, it doesn’t use data.

The company unveiled a new version of its mobile app today, which sports some new messaging features that make it more lightweight. But while the app is powered by wireless data networks, you still get the option to stick with text messages. So when you’re stranded at a music festival with a dozen other people and no data network, you can still access its new features.

GroupMe is a group-texting service that creates a virtual chat room around text messages. You create a phone number that anyone who signs up to the group can text. That text is then delivered to everyone in the group. You can make as many groups as you want. It works for conference calls as well — anyone can dial in to the number and start a group chat.

The GroupMe app is a glossy BlackBerry Messenger-like app on top of the service’s typical texting service. Instead of going through text messages, the app creates a visual room where users can parse messages and photos and see the members of the GroupMe group. They can see on a map where previous messages were sent and also start a conference call with all GroupMe group members. 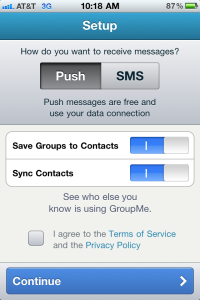 The app’s new direct messaging feature is equivalent to sending a direct text message to someone within the group, but it’s a little easier. Instead of hunting down an individual’s phone number, you can just send a message directly through the app. There is also a “questions” feature, which lets users quickly direct a message to specific GroupMe group or individual.

“We kept seeing people going to their old groups to ask a question,” GroupMe co-founder Steve Martocci told VentureBeat. “We wanted a way for groups to become more lightweight, we’ve really driven our features from our own users.”

That doesn’t mean the SMS part of GroupMe is going away. When you install the app, it asks whether you want to receive SMS messages or push notifications. Any messages sent within the GroupMe app are also texted out to members in the GroupMe group. They show up in both text message and in the App’s chat interface. If a user has a weak data connection, the app also prompts them to drop down to SMS.

“The commitment to SMS has not gone down … you can invite anybody over SMS, they chat right over SMS, everything is backwards-compatible with SMS,” Martocci said. “SMS is something that we are still very heavily focused on, we think it’s a huge benefit of giving people able to use it.” 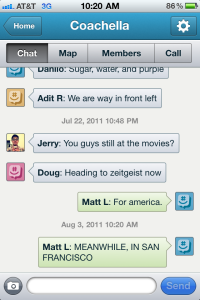 The app is now available in more than 90 countries for BlackBerry, Windows Phone 7, iPhone and Android users. The new features in the app are cool, and they don’t get in the way of what made GroupMe great — its support of just about every phone out there by using SMS. The company is still working to roll out its SMS service in as many countries as possible, Martocci said.

Startups like GroupMe are constantly showing us that there are ways to make text messaging even more useful. All it takes is a little bit of thinking outside the box, and GroupMe’s $10.5 million in cash doesn’t hurt either.

GroupMe is built on top of a service provided by Twilio, a San Francisco-based startup that provides access to voice and text-messaging services that might otherwise be out of reach to small companies. The first version of GroupMe was built over a weekend in May 2010 during a hackathon, a type of programming contest that challenges developers to swiftly create a working Web service.