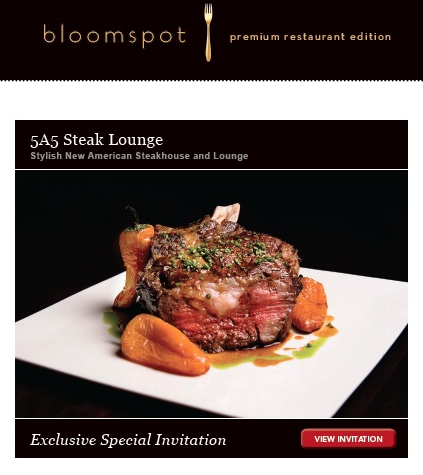 San Francisco-based bloomspot has found a ray of sunlight in the current economic storm. The daily deal marketer just announced $35 million in funding and a new platform that helps merchants recognize and reward their top customers.

“If we went out and tried to raise money today as a daily deal site, we would be laughed out of the room,” says Jasper Malcolmson, co-founder and CEO of bloomspot. “No one would invest serious capital in another daily deal site. We were able to do this because we show tremendous business growth, quality consumers and merchants, and we have a fundamentally new business model.”

Malcolmson, who spoke to VentureBeat by phone, doesn’t call bloomspot a daily deal company. This is a departure from the company’s business model in 2010, when it was positioned as a daily deal site for the wealthy. That year it raised $9 million. Malcolmson says bloomspot no longer sends consumers deals on a daily basis.

Instead, bloomspot is attempting to close the redemption loop that has plagued the daily deal industry. Unlike the existing daily deal model that charges merchants regardless of how much consumers spend or return, bloomspot wants to take responsibility for merchant profitability. The company is doing so with algorithms that predict consumer spend and return rates. The data can be used to guarantee spending levels.

Merchants can also track customer visits and in-store credit card transactions and make private offers to big spenders (the image above is an example). Rather than blast deals to a mass of subscribers, bloomspot helps merchants target customers that consistently generate profits. Bloomspot has filed for patents around each of these concepts.

“This data isn’t just one or two transactions, we’ve been doing this at scale for months,” says Malcolmson, who says bloomspot is being used by hundreds of businesses. “Never before has this data been available.”

This is where Malcolmson draws the line between bloomspot and daily deal companies. He says he doesn’t have any direct competitors, yet.

“We know of no other company in the local offer marketing space that is operating with this business model,” he says. “We’re raising money because we are looking to invest in technology and growing our consumer base. Our focus is innovation.”

“The local marketing space has always been interesting, dating back to when I was at Expedia,” says Blachford in a phone interview. “We spent a lot of time thinking about these issues. How do we make marketing partners accountable for results? Now you have a situation where you have a holy grail for marketers who use coupons: how to determine ongoing lift. Most marketers don’t have someone tracking that, and then they typically use surveys. Bloomspot’s local marketing strategy could become a widespread phenomenon. There’s much broader potential here.”

Besides bloomspot’s patent-pending marketing concepts and algorithms, the company appeals to investors with it’s online commerce-savvy team. Many are former Yahoo! and eBay executives. Malcolmson spent five years at Yahoo! as VP of Product for Yahoo! Search, as well as VP/GM of the Yahoo! Commerce Division. Co-founder Ashish Baldua spent eleven years in the engineering group at Yahoo! as one of the first one hundred employees of the company, which culminated in leading engineering for the Yahoo! Commerce Division.