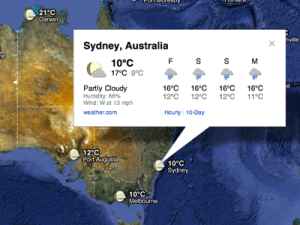 Google has finally added weather data to its maps, but is this really the best it can do?

Overall, the new layer is somewhat useful, but it doesn’t seem like a very serious effort, and it pales next to the wealth of weather apps and sites already available.

The new weather layer on Google Maps, launched today, displays current temperatures and conditions in cities and towns around the world. Clicking or tapping on the weather icon for a particular city opens an info window displaying current humidity, wind conditions and a forecast for the next four days. You can change the units of wind speed (mph or km/h) and temperature (F/C), and enable clouds to be displayed. The weather data is provided by Weather.com. Cloud satellite imagery for this layer, originally only featured on Google Earth, is supplied by the U.S. Naval Research Lab.

To add the weather layer to a map, hover over the widget in the upper right corner of Google Maps and select the weather layer from the list of options. Once you’ve added it, chances are you will feel underwhelmed.

“Google will buy a company if they get serious about the weather and that’s how they’ll be a category killer,” says Bill Kirk, CEO and founder of Weather Trends International. “That’s something we expect will eventually happen.”

Weather Trends International recently announced WeatherTrends360.com, a website and accompanying app, which offers consumers a long-range forecast app for 6.4 million locations around the world. The app, which uses the Google Maps API, reached No. 5 in the paid weather apps ranking and among the top 250 of all paid apps in the iTunes App Store. Kirk adds that for the past two quarters weather apps have been the most downloaded apps. He competes with Weather.com’s app and thousands of others.

“This is a very smart strategy for Weather.com,” says Kirk. “This is a case of ‘keep your enemies closer.’ If Google really decides to go there, they could dominate. You worry about huge companies that have tons of cash that are capable of jumping into the weather service and blasting everyone out of the water.”

Kirk isn’t too worried, yet. Google isn’t even utilizing all of Weather.com’s data. If you want more than a four-day forecast, or hour-by-hour data, you will need to click on a link that takes you to Weather.com. We are waiting to hear back from Google for a comment on its weather goals.

Part of the reason Google may be content using Weather.com is cost. It’s not that Google needs to save money, but if weather isn’t something it is ready to take seriously, why not buy a quart of milk instead of the whole cow?

“The data is free, it’s having the infrastructure to process it that is expensive,” says Jeff Hawkins, a meteorologist at the U.S. Naval Research Lab (NRL). He has worked closely with Google for the last four years on its Google Earth cloud satellite imagery. “It’s doable and the data is widely available, but it’s a substantial effort if you are not in the business of doing it.”

Google doesn’t seem to want to get into the weather business, based on the company’s relationship with Weather.com and the NRL. Hawkins says Google approached the NRL after the company saw an earlier satelite product displaying clouds globally. Google partnered with the NRL rather than doing it from scratch.

“The imagery comes from five different satellites,” says Hawkins. “When we update the product, Google uploads it to Google Earth and now Google Maps. The big change today is that while there are many Earth users, there are way more Maps users, something like over 100 million users. That number is going to grow as smartphones increase.”

This leads us to wonder about an Earth/ Maps merger. The two products are blurring.

Hawkins says the NRL is upgrading its cloud data and that in a couple of months Google Maps will display these upgrades. The update will include infrared data and visable imagery that will better display all clouds and fog accurately.