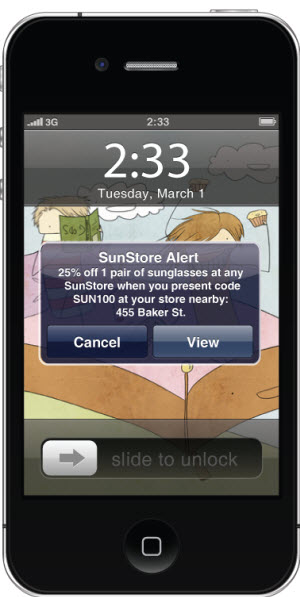 Location-based digital marketing company Placecast has made a name for itself by sending text messages to users when they’re within range of a business that is offering discounts. Now the company is expanding these updates, called ShopAlerts, to work within mobile apps.

San Francisco-based Placecast will take advantage of location-based push notifications in apps for iPhones, Android devices and other smartphones. The new service shows how mobile marketing is becoming more sophisticated now that it can use a person’s location, shopping habits and spending history to determine what kind of promotion that user would be willing to receive. These advancements mean there could be a real future for “geofenced” marketing promotions — offers that are pushed to users within a certain geographic radius.

Placecast can now use apps and text messages to draw consumers into stores. On top of that, it can use ShopAlerts to get potential customers to come back to apps created by retailers for new discounts and deals. Traditionally, users fire up apps only if they are intentionally looking for a brand while shopping.

“We learned from our research that people just want to get a message when there is a good deal nearby,” said Alistair Goodman, CEO of Placecast, in an interview. “The combination of push and location allows brands to better take advantage of apps they have already built.”

Placecast is hoping that the new service will prove useful for retailers trying to get more engagement with consumers for the upcoming fall shopping season. Placecast will work directly with retailers to integrate ShopAlerts into their apps.  Users have to actively download Placecast and opt-in to the service before they receive any offers.

Rival companies such as Groupon have talked about plans to offer location-based offers through mobile phones, but Placecast is already there and offering a handful of innovative features. Using geofences, Placecast can sense whether a user is near a store, even if the app is turned off, and deliver real-time notifications about deals as the shopper passes by. This kind of pitch could be more effective than text messages, since the pitches can take a more elaborate multimedia form to entice a user. It can tap customer relationship management data, loyalty, past purchases, time of day, and even the weather to shape relevant recommendations for the shoppers.

In a survey by market researcher comScore, about 5 percent of users said they had opened a Groupon app to search for offers, while 6 percent have opened a LivingSocial app. But 14 percent of the people who used those apps said they had opened it after receiving a push notification. Greg Sterling, principal at Sterling Market Intelligence, said that geofence retail marketing is one of the biggest trends of 2011.

Placecast’s ShopAlerts is used by major carriers such as AT&T in the U.S. and O2 in the United Kingdom. Brands using it include Starbucks, L’Oreal, Subway, Kohl’s, Kmart, HP, Chico’s White House Black Market, JetBlue and SC Johnson.

Placecast is backed by Onset Ventures, Quatrex Capital, and Voyager Capital. Placecast was founded in 2005 and it has 30 employees. Placecast said it has more than 3 million active users in its ShopAlerts programs in the U.S. and Europe. Placecast has raised $13 million to date.