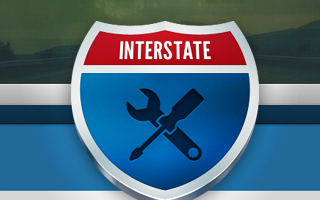 Interstate, a new application that launched today at Y Combinator‘s Demo Days, is a simple tool that allows company founders, project managers and others to share their future plans with customers, clients and even employees.

The tool works for developers working on their own as well as for larger companies — any entity that needs to communicate its roadmap to an audience. Interstate lets you do project management and share “the bits that are really important” with your clients.

The app also features a simple dashboard that gives interested parties an overview of recent progress on specific tasks and overarching goals.

“If you want to share what you’re doing and you don’t want that extra work, that’s what Interstate is for,” said Cooper. “Just manage your project as usual, and we’ll automate the rest.”

When you’d like to share your roadmap, you can choose from two themes to skin it, then just paste four lines of Javascript anywhere you like.

We asked the team what kinds of people were using Interstate and what they were using it for; Cooper gave us a couple examples.

“Virb pivoted from a trendy social network to a website builder. They’re using Interstate to explain how things are moving along with their customers. And Mino Monsters are using Interstate quite a lot to plan out long term ideas, and they’re able to communicate it among their own employees. That’s a very popular option.” 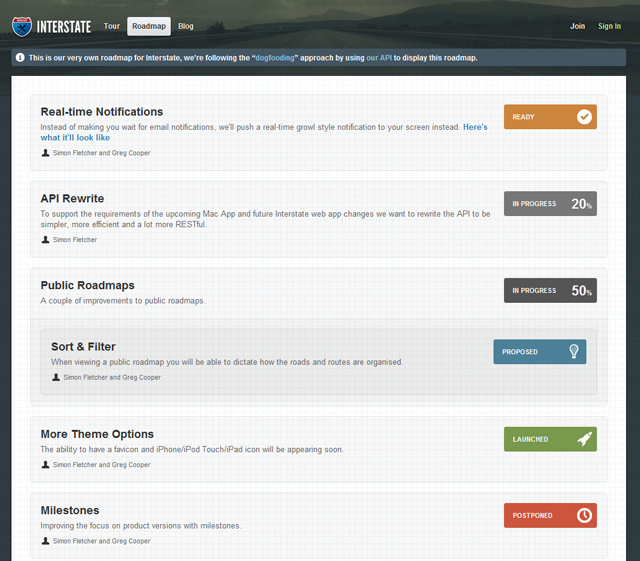 Here are a handful of Interstate’s features:

Currently, the app has seen strong growth, garnering 3,000 users with no advertising other than word of mouth. Customers include IBM, design community Forrst, Twitter, Seesmic, commenting system Disqus, Vimeo, car service app Uber, photo booth app Dailybooth and a slew of other web properties. The app is also being used by large universities such as Michigan State and Virginia Tech.

While the service is currently free, the Interstate founders said they do plan to start charging for it in the coming months. Eventually, they’ll introduce a freemium model. “The idea was, because we’re startup founders with a ramen noodle lifestyle, there will always be a free product for small teams and open source projects,” said Cooper.

We asked the team whether they really thought companies and developers would be willing to pay for the service. Cooper shared a rather funny story about that:

“About six months ago, we had a lump of cash in our Paypal account, and we couldn’t work out what it was. It turns out we had a bug on the website that was allowing people to send payments to us, and they were! People were trying to pay for a free app. We had to refund the money. People are still asking to pay, but we don’t want to roll it out too fast.”

The team is actively seeking funding. The two founders are from the U.K.; the team also includes a non-founder Mac developer, Alec Sloman.