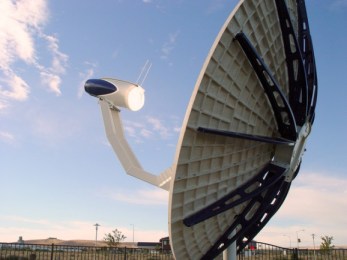 Infinia, a manufacturer of satellite-like dishes that generate electricity from sunlight, has raised $6 million of a $25 million funding round, according to a filing with the Securities and Exchange Commission.

Infinia’s PowerDish is a parabolic disk covered with mirrors that concentrate sunlight. That light hits a small point on something called a Stirling engine, which uses the heat generated from the sunlight to create a temperature differential across the engine. That causes helium gas in the engine to expand and contract, which pushes a piston and generates electricity.

Stirling engines are a variation of a class of energy projects that use the heat generated from sunlight to produce electricity. Other methods include using a large array of mirrors to heat a point on a tower, which heats up molten salt that boils water and powers a steam engine. Solar thermal power projects have attracted $2 billion in federal funding this year alone.

Infinia raised $50 million in its most recent funding round in 2008. GLG Partners led the $50 million round, with Wexford Capital and previous investors Vulcan Capital, Khosla Ventures, EQUUS Total Returns, Idealab and Power Play Energy also participating. The company also raised $9.5 million in 2007 and $3.5 million in early 2005.

The company snagged a $30 million loan from Ex-Im Bank to build solar dishes that generate 10 megawatts worth of electricity for customers in India earlier this year. The company hired a new chief executive, Mike Ward, in April.

VentureBeat has contacted the Infinia for additional details.