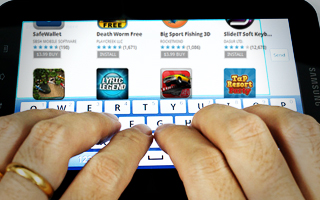 App search service Quixey has just sealed a deal for $3.8 million to power its growth and develop new partnerships.

Quixey aims to do something new: It lets users search for mobile, desktop and web apps based on what the app does. The company calls this “functional search,” and Quixey says it differs from typical mobile app store search, which is based on keywords found in titles and descriptions.

Instead of relying solely on what app developers say about their own products, Quixey incorporates data from review sites, blogs and social networks to determine what an app does. Using this fuller set of information on app functions and features, Quixey is able to show users an ostensibly more accurate and complete list of apps.

“Apps make people’s lives better… Quixey is working with companies throughout the world to ensure that their users can finally access what technology has to offer,” said Tomer Kagan, Quixey co-founder and CEO in a release today.

Right now, the app search works for platforms such as Android, iOS, Mac and Windows. Quixey also covers apps, plugins and extensions for browsers such as Chrome and Firefox, apps for Facebook, general web apps and more.

The new funding will help get Quixey’s services onto more devices by allowing for more and better partnerships with manufacturers, carrier networks, app stores such as the iTunes App Store and Android Market and other organizations that control what functions appear on smartphones and other devices. Quixey hopes to power app search for these entities, and it currently also lets individuals run queries on its website.

The $3.8 million is Quixey’s first institutional round. The investment was led by U.S. Venture Partners and WI Harper Group with participation from Webb Investment Network and Innovation Endeavors.