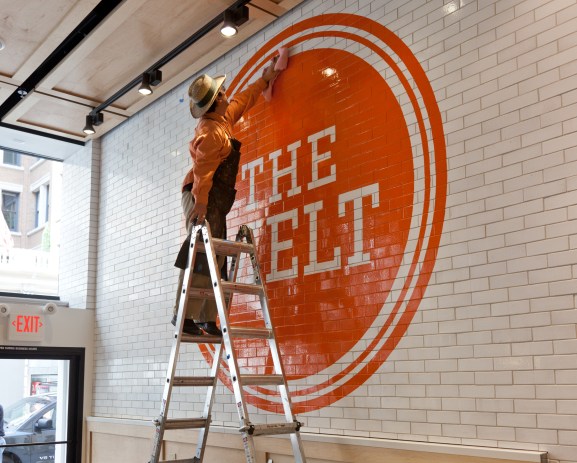 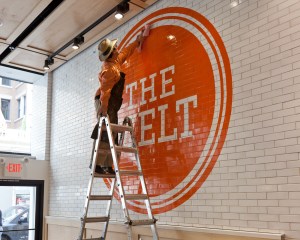 I am meeting with Jonathan Kaplan, the founder of the Flip video camcorder, at his new fast casual restaurant called The Melt. The chain’s flagship opens on August 30 in San Francisco. They serve soup and grilled cheese, and I am a vegan.

“Of course, we would love for you to try one,” says Kaplan, who doesn’t know this. I politely decline, without going into the gory details of my dairy-free diet.

I can’t tell you about how wonderful Kaplan’s food is, but I can tell you Melt’s innovative way to pre-order and then pay for food from your smart phone is fantastic.

Melt uses location-based mobile technology so guests can remotely order Melts, soups, or other items (they have Cracker Jacks) from mobile phones. Customers can place orders on Melt’s HTML5-based mobile site and receive a QR code that can be scanned at any restaurant location. There’s just one for now, located at 115 New Montgomery Street, but Kaplan is aiming for hundreds of locations in cities around the United States. 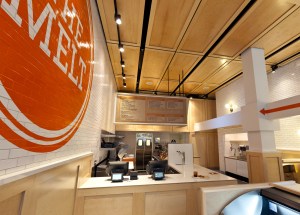 The restaurant on Montgomery Street, the first of five in San Francisco, is shiny and white. The soda fountains look like old soda jerks, but they have fancy buttons. The font is bold and basic. Signage is minimal. It’s a sunny day and the doors are open even though the restaurant isn’t open to customers yet. A steady stream of students, business people and shoppers keep trying to come in and order. The first thing they look at is the menu, and then they move to the cash register to order. They are politely turned away (why doesn’t someone put up a sign?) and told to checkout the restaurant’s website. Not one of them is aware they can order with their phones. This will take some getting used to for restaurant goers. Even in a tech-friendly city like San Francisco.

“This is an industry that is ripe for technology innovation,” says Kaplan, referring to the point-of-sale (POS) industry. “Existing players are going to struggle but work hard to get involved here. It will be interesting to see where they go. We want the experience of a legacy player and the innovation of a new player, so we have to write the middleware.”

Melt’s system isn’t just POS. Kaplan has created a single system that does sales, manages payroll, helps employees clock in and out and other functions designed for managers. This will make the system slightly more competitive in the restaurant space against companies like Square and PayPal. I can’t help but wonder if Kaplan hasn’t just created a restaurant chain to test what could become a profitable POS system. I snap out of that idea when I see how enthusiastic he is about restaurants.

Kaplan is wearing the Melt uniform, making him blend in with the crew. Except his uniform is immaculate, ready for interviews with the press (CNN is shooting while we talk). The rest of the crew has been at work, testing the kitchen.

“I was once a busboy at a Chinese restaurant,” says Kaplan, when I ask him about his previous restaurant experience. And that’s the reason why the media is interested in this restaurant: What is the founder of the Flip doing in a restaurant?

“My team has gone on to more exciting things too,” says Kaplan. ” This is hard and cool and different.”

I wonder if this was the answer he gave Sequoia Capital, one of Silicon Valley’s most influential VC firms, when it asked why it should invested in Melt. Whatever the answer was, it worked. The exact amount of Sequoia’s investment hasn’t been specified, but in an interview with AllThingsD, Kaplan said it’s “enough to open 20 stores” and that those stores will cost between $500k to $1M to open. Restaurateur Michael Mina is also participating in this new endeavor.

Sequoia is betting Melt will be another hit like Flip was. But, depending on who you ask, Flip was also a flop.

Just two years after its $590M acquisition of Flip in 2009, Cisco shut down the Flip division as part of a broader restructuring of its consumer business. It wasn’t all Flip’s fault. Cisco has struggled with consumer devices and didn’t do much to improve Flip technology. Cellphones also started shooting high-definition video, erasing any need to carry two camera devices at once.

That experience must have been exhausting for Kaplan, and explains why he has the desire to embrace comfort food and a totally different type of technology. He has the money to do it, but he doesn’t want to talk about money. He want’s to talk about a different kind of cheese.

“The Melt product is nostalgic,” he says as I drink water from a compostable Melt cup. “It makes people happy.”

This idea of making people happy comes up over and over during the interview. He says grilled cheese makes people happy and using their phones to do cool new things makes them happy. He says “making people happy” was also the foundation of the Flip. Besides that foundation, the two companies also share a similar user experience.

And that’s when Kaplan launches into the ways Melt will change the world. There will be a “round up” philanthropic program to encourage customers “to start the conversation about world hunger.” Customers can round-up the total of their purchase (i.e., a $5.75 purchase can be rounded up to $6.00) and the additional amount (.25) will be donated to charitable organizations fighting world hunger. Additionally, staff members at each restaurant location will choose a local hunger-fighting charitable organization in its neighborhood and develop a specialized philanthropic program.

“It’s about thinking how fortunate you are to afford a meal for $9,” says Kaplan. “And everything is recycled. It’s about a conscious responsibility to the world.”

It’s also about real estate, which is obviously very import to Kaplan’s restaurant chain. He cites Ron Johnson, the man responsible for Apple’s retail strategy, execution and performance, as a role model in this task. The next restaurant will open in San Francisco’s Embarcadero One. Kaplan is also working on getting an alcohol license.