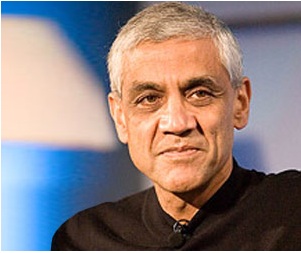 Vinod Khosla‘s advice for entrepreneurs is to ignore the experts and invent the future you want. That’s what he told the graduating class of Singularity University last week in a closing speech.

He said entrepreneurs will catch a lot of criticism for ignoring the experts and yet they should plow forward anyway. Khosla, founder of venture firm Khosla Ventures, is one of the most successful venture capitalists of our time, having invested in companies such as Cerent, Juniper Networks, and Corvis. Yet his attitude is pretty anti-establishment when it comes to independent thinking, which he believes is essential for entrepreneurship.

“Trust in your instincts and trust in a lot of experimentation,” Khosla said in an interview.

Quoting George Bernard Shaw, Khosla said, “The reasonable man adapts himself to the world. The unreasonable man persists in trying to adapt the world to himself. All progress, therefore, depends upon the unreasonable man.” And quoting Martin Luther King Jr., he said, “Human salvation lies in the hands of the creatively maladjusted.”

In his speech, Khosla spent a lot of time showing how expert predictions have gone awry, like Lord Baron Kelvin, the head of the Royal Society who said that “heavier than air flight” was impossible just a few years before the Wright Brothers flew at Kitty Hawk. And he said that, even today, oil experts can’t accurately predict the price of oil.

“It was an expensive study,” Khosla joked.

Philip Tetlock, a professor at the Haas Business School at the University of California at Berkeley, did a study on the accuracy of forecasts going back 25 years. When he finished the study, he had collected 82,000 forecasts against real-world outcomes from nearly 300 academics, economists, policymakers and journalists.

“Which reasonable expert would predict these things?” he said. “A tweet didn’t exist five years ago. Who would predict that it would play a role in Egypt and the Arab Spring? These things are not possible to predict because they are so exponential,” or reflect so much change they bear no resemblance to the current reality.

Khosla talked about what he calls the “Black Swan Thesis of Energy Transformation.” He is investing over $1 billion of his clients’ money in “black swans,” or ideas with the potential for huge jumps in environmental benefits, rapid payback, and easy scalability. But Khosla said he expects most of these investments to fail. He recalls how everyone thought that all swans were white until a black swan was spotted in Australia. That changed the definition of a swan. To find those black swans, you have to break out of the traditional thinking, and then you have to take “more shots on goal,” (a hockey analogy) where your chances of finding a black swan are best.

“Five billion people want to live like 500 million do today, with an energy-rich lifestyle,” he said. No amount of small energy savings, like using one sheet of toilet paper instead of two, as proposed by singer Sheryl Crow, will accomplish that aim, Khosla said. Too many efforts to save energy are turning out to be so small that they actually expend more energy than they save.

He said that incremental innovations won’t do, and that’s why the entrepreneurs at Singularity University are important, since the program is focused on technologies that could affect a the lives of a billion people.

“What matters are exponential innovations,” he said. “The only way to get there is radical innovation. There is no question you can compete with fossil fuels with renewables and be cheaper.”

Khosla Ventures is still investing in computer science and other traditional technology in addition to cleantech, Khosla said. Square, for instance, is one of the companies he invested in. Khosla Ventures hasn’t yet had its home run in cleantech, but his shots on goal in cleantech include nearly 50 investments in areas that include energy storage, distributed generation, agriculture, batteries, electrical efficiency among other categories.

As for a bubble in Silicon Valley investments, Khosla didn’t seem too worried.

“I don’t know if we are in a bubble or not,” he said. “We will find out after we crash, if we crash. But it doesn’t matter. What an entrepreneur does is to build for the long run. If the market is great, you get all of the resources you can. You build to it. But a good entrepreneur is always prepared to throttle back, put on the brakes, and if the world changes, adapt to the world.”

Khosla counts himself among the experts you should ignore.

“I’ve probably failed more often than anybody else in Silicon Valley,” Khosla said. “Those don’t matter. I don’t remember the failures. You remember the big successes.”