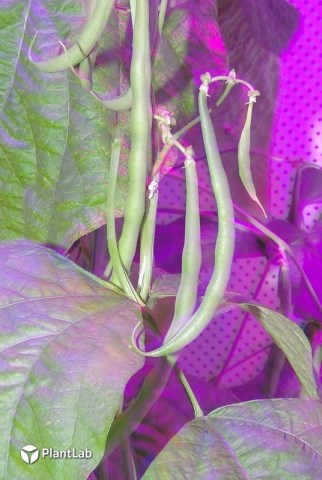 The Dutch “plant control freaks” behind PlantLab want to farm indoors under purple light. It’s not just for the looks, though. PlantLab has recently developed a set of technologies for optimal indoor farming so that food can grow anywhere from the sunless heart of an office building to an abandoned factory. Picture a 5-star hotel for lettuce, as opposed to the motel provided by a standard glasshouse.

PlantLab stacks “Plant Production Units” on top of each other to make maximum use of space. Plants don’t need the entire light spectrum of sunlight to produce energy, so PlantLab uses LED lighting which emits only blue and red light, giving the growing rooms a weird, disco-like atmosphere.

Because of the indoor growing environment, no pesticides are required and 90 percent less water is used than in greenhouse growing. In the traditional glasshouse, the temperature rises when the sun shines on the glass so the plants need to be cooled with water. Inside a Plantlab growing room, the temperature is much lower and the conditions are kept constant, eliminating the need for water-based cooling.

Automation software controls the environment to provide each plant with optimal levels of light, water, heat, humidity and nutrition and dozens of other growing parameters. The company has developed mathematical models, called Plant IDs, for each plant type, which automatically control the 56 different environment parameters in a production unit to ensure optimal growth.

[youtube http://www.youtube.com/watch?v=Ct3dK2_ksvk?rel=0&w=560&h=345]
The first indoor city farm using PlantLabs’ technology will be in a disused factory in Amsterdam. It’s run by Philip Traa and NwA architects.

“We are starting a cooperative,” says Traa, “where Amsterdam members pay us a membership fee every year and then buy the vegetables at cost. Indoor farming must be transparent for customers so they can come and see and taste in our city farm.”

The first crops are lettuce, herbs, tomatoes, peppers, herbs and cress. Harvesting will start at the end of 2011. The farm will provide 2,000 Amsterdammers with a regular supply of vegetables.

The advantages for cities could be considerable, in terms of reducing traffic and making better use of currently disused space. Amsterdam, for example, has 1.4 million square meters of vacant office space.

“If you grow in the middle of the city where the market is, you have less transportation and lower CO2 emissions,” explains Traa. “A glasshouse is only one floor. We can grow on 100 floors in a skyscraper, or in the heart of the building, since you don’t need sunlight. Solar panels on the side of the building can provide energy for growing.”

Globally, Traa sees the Middle East as the biggest potential market because outdoor growing conditions are so harsh there. Other high-potential areas are China, South Korea and Japan. “Japan has little farmland. China has so many people to feed in the cities. South Korea has both big cities and not enough farmland,” Traa explains.

PlantLab’s approach to growing food indoors currently costs more than alternatives like glasshouses, since LED lighting is expensive and a considerable amount of energy is required to run the plant production units. The Amsterdam farm will use approximately 1 megawatt of electricity per year, the equivalent of around 1,000 homes.

“To be sustainable, that megawatt needs to be green,”  Traa maintains. “We think the energy required will be 25-30 percent less in 2 years.”

But the energy requirements of the plant production units could be offset by location. A large part of the energy currently used in food production is spent on transport, with supermarket fruit and vegetables clocking up massive numbers of gasoline-powered food miles. Also, LED lighting and solar panels may get cheaper while oil prices are likely to rise, which should increase the attractiveness of PlantLab’s solution. Also, since indoor growing is predictable, food can also be grown on demand leading to less waste and stable pricing.

PlantLabs’ vision is a strange combination of hyper-intensive farming with local growing using no pesticides. It’s energy-intensive, but then so are glasshouses and flying in blueberries from Africa. 1 billion people already don’t get enough to eat and the world needs to produce 100 percent more food by 2050 to feed the growing population.

“When you want to feed the world you need to grow intensively,” says Traa. “The organic way is only a solution in the Western world.”

The green heart of the future city may be in a sunless basement.